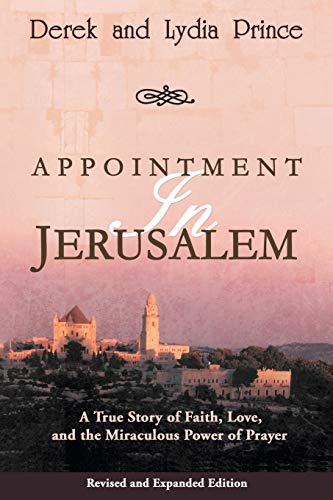 Praise for Appointment in Jerusalem - It was my great privilege to know Derek and Lydia Prince for many years. Lydia Prince was a lover of Israel, a compassionate and tender woman who adopted nine daughters and whose demeanor was as bold as a lioness. On one occasion, when I was visiting Lydia and Derek in Florida, Lydia asked me if I would like some tea. I responded, Yes, I would love some ice tea. Lydia, who was Danish, looked straight at me and responded, In my home we do not boil water and then mix it with ice to make it cold; we do not add sugar and then fill it full of lemons. We have hot tea, if you would like some. I responded, I would love to have some hot tea. She smiled, left the room, and minutes later produced the hot tea. When Derek was ministering in my church, Lydia sat on the front row like a five-star general. One woman before service asked Lydia, How are your children? Lydia responded, Do you really want to know? The woman was trapped. Yes, I would love to hear about your children. Lydia took her by the hand and sat her down on the pew beside her for a forty-five-minute review of how and where her nine daughters were doing. That was Lydia. She and Derek are in heaven today walking the streets of the New Jerusalem, looking down on ancient Jerusalem in Israel, knowing that soon we shall all be there together. --John Hagee, Senior Pastor - Cornerstone Church, San Antonio, Texas

Derek Prince Derek Prince (1915 2003) was born in Bangalore, India, into a British military family. He was educated as a scholar of classical languages at Eton College and Cambridge University in England and later at Hebrew University, Israel. While in the British Medical Corps during World War II, Prince began to study the Bible as a philosophical work. Converted through a powerful encounter with Jesus Christ, he was baptized in the Holy Spirit a few days later. This life-changing experience altered the whole course of his life, which he thereafter devoted to studying and teaching the Bible as the Word of God. Discharged from the army in Jerusalem in 1945, he married Lydia Christensen, founder of a children s home there. Upon their marriage, he immediately became father to Lydia s eight adopted daughters six Jewish, one Palestinian Arab, one English. Together the family saw the rebirth of the state of Israel in 1948. In the late 1950s the Princes adopted another daughter while he was serving as principal of a college in Kenya. In 1963 the Princes immigrated to the United States and pastored a church in Seattle. Stirred by the tragedy of John F. Kennedy s assassination, he began to teach Americans how to intercede for their nation. In 1973 he became one of the founders of Intercessors for America. His book Shaping History through Prayer and Fasting has awakened Christians around the world to their responsibility to pray for their governments. Many consider underground translations of the book as instrumental in the fall of communist regimes in the USSR, East Germany, and Czechoslovakia. Lydia Prince died in 1975, and Derek married Ruth Baker (a single mother to three adopted children) in 1978. He met his second wife, like his first, while he was serving the Lord in Jerusalem. Ruth died in December 1998 in Jerusalem where they had lived since 1981. Until a few years before his own death in 2003 at the age of eighty-eight, Prince persisted in the ministry God had cal