McCaslin, Richard B. The Last Stronghold: The Campaign for Fort Fisher: 22 (Civil War Campaigns and Commanders)

The Last Stronghold: The Campaign for Fort Fisher: 22 (Civil War Campaigns and Commanders) 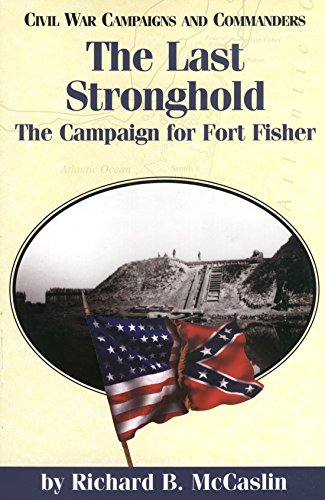 The huge earthen mounds silhouetted in the darkness of Southern nights near Wilmington, North Carolina, were signs of safety for Rebel ship captains and symbols of defiance to their Federal counterparts. These earthworks, the gun emplacements of Fort Fisher, embodied the hopes of the South and stood as a pillar of sovereignty to the beleaguered nation. During the American Civil War, the independence of the Confederacy would hinge upon its ability to exist as a sovereign nation in the world. Part of this identity came from its continued connection to European goods by eluding the Federal blockade of its coast. The busy port of Wilmington was a key city in maintaining this agenda and Fort Fisher its able defender. By late 1864, this city and the traffic it engendered had become an important target for Federal military planners as it had become the primary haven for blockade-runners in the eastern Confederacy. Wilmington also served as the last major link for the eastern Confederate armies to the weapons merchants of Europe and the world. This distinction, which came because of the city's location and the configuration of its harbor, proved to be a mixed blessing. During the Civil War, the formerly quiet waterfront became the focus of a swelling tide of commerce. Some of that trade had a distinctly seedy aspect as merchants motivated by greed over patriotism smuggled in luxury items for high profits instead of filling their holds with the materiel of war. Whatever their motives, those who remained in Wilmington understood their role, and they were not eager to have it suddenly ended by a Federal invasion. To keep the city from falling, the Confederacy relied on a strong system of fortifications, the most formidable of which was Fort Fisher. The United States Army in late 1864 and early 1865 made the fort the target of the largest amphibious operation prior to World War II. The successful reduction of the post brought to a close not only one of the most interesting eras in Wilmington's history, but sounded the knell for the brief life of the Confederacy itself.

RICHARD B. MCCASLIN is professor of history at High Point University in North Carolina. He is the author of several books on the Civil War, including Tainted Breeze: The Great Hangings at Gainesville, Texas, October 1862, winner of the Texas State Historical Association's Tullis prize; and two books in the University of Arkansas Press's Photographic History of the Civil War series.