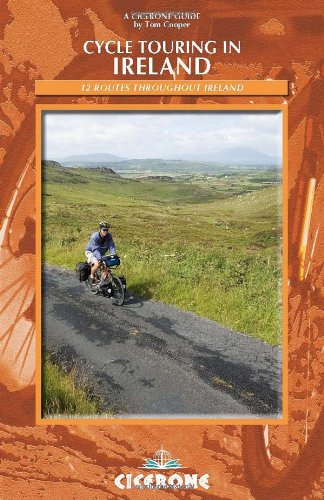 A guide to cycle touring in Ireland describing 12 one to two-week cycle tours for road bikes all around and across Ireland visiting Dublin, Belfast, Derry, Galway, Limerick, Kenmare and Cork. Ireland is a cyclists paradise - quiet roads winding along spectacular coastline, through tiny villages, over mountain passes and past countless historic sites. The routes described here cover Ireland and Northern Ireland from the Causeway Coast in the north to Mizen Head in the south and from Dublin in the east to Connemara in the west. They seek out the quiet, the quirky and the spectacular parts of this beautiful island in tours that can mostly be fitted into a single week's riding. The mountains, valleys and lakes are waiting, as are the hostels, camp sites and traditional Irish pubs - and this guide tells you all you need to know, whether you're a cycle touring novice or an old hand. Routes range from 250km to 500km with further suggestions for combining routes to make five grand tours and detailed route cards are provided, which can be followed junction by junction as you ride and list all facilities and sights along the way.. NOTA: El libro no está en espańol, sino en inglés.

When Tom Cooper decided to explore Ireland by bike, he couldn't find the guide book he wanted. So he set out to write this one to inspire and help cyclists to enjoy cycle touring in Ireland as much as he does. Tom has worked as a journalist and editor for newspapers in both England and Australia and this is his first guidebook.