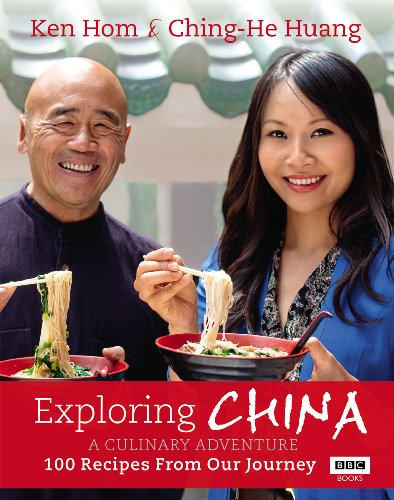 Exploring China: A Culinary Adventure is the delightful companion book to the BBC TV Show featuring their culinary adventure across China

Two of the most highly respected authorities on Chinese and Oriental cooking today, Ken Hom and Ching-He Huang, come together in this exciting cookbook and is the result of their journey through China on a culinary and cultural odyssey to find the old, the new and the unexpected as shown in the BBC TV show.

They tell the story of China, both old and new, through food. Each recipe in the book features a back story from Ken and Ching so you can learn the secret stories behind all your old favourite recipes and be inspired to find new ones.

They cook with local families, en route to discover the influence of Buddhism on vegetarian food and whether the Chinese did actually invent tortellini in remote Kashgar before travelling to Sichuan Province, China's gastronomic capital. Ken is the old-hand who brought the wok to the West and Ching-He is the energetic newcomer. Together they uncover the secrets of Old China and the techniques of the new, fusing them together to create a unique and authoritative perspective on Chinese food that will surprise and inform.. NOTA: El libro no está en español, sino en inglés.

Ken Hom was born in Tucson, Arizona after his Cantonese parents left China after World War II. He is an internationally regarded authority on Chinese and Oriental cooking, has 28 years' experience as a television chef and has written over 30 cookery books. In 2008 he was awarded an honorary doctorate from Oxford Brookes University and in 2009 was awarded an honorary OBE for 'services to the culinary arts'.

Ching-He Huang was born in Taiwan and is a self-taught and passionate cook, and an ambassador for easy, healthy Chinese cooking. Her ancestors emigrated from the Fujian province in China to Taiwan during the Ming Dynasty. Ching’s dynamic approach to modern, healthy Chinese food has seen her present such series as Chinese Food Made Easy on BBC2, Ching’s Kitchen, Ching’s Chinese Food in Minutes and Easy Chinese in the US, which have been seen around the world. She has published a number of cookery books, including the bestselling BBC title Chinese Food Made Easy, China Modern, Chinese Food in Minutes and Ching’s Fast Food.