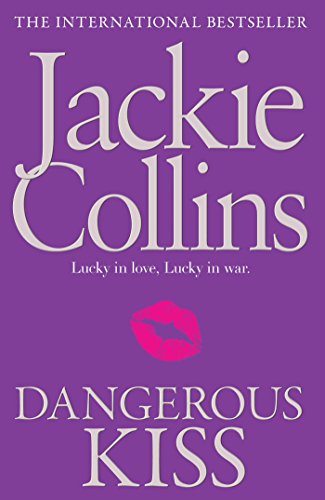 In Chances, Lucky grew up in a top crime family; in Lucky, she was married three times; in Lady Boss, she took on Hollywood and bought Panther Studios; and in Vendetta, she fought off a lifelong enemy to keep the studio, and her husband. Now, in Dangerous Kiss, when a member of her family is brutally gunned down in a random holdup, her fury knows no bounds. While she is tracking the killer, her relationship with her husband, charismatic writer and director Lennie Golden, is put to the test. Then, suddenly, into her life comes a man from her past - a man with a dangerous kiss. Dangerous Kiss is a story of raw anger, love, lust, murder and revenge, and at its white-hot center is Lucky Santangelo, a strong, exciting woman who dares to take chances - and always wins.

There have been many imitators but only ever one Jackie Collins. The iconic British author was called 'the definition of a class act' by Graham Norton and a 'smart, talented and gorgeous woman who paved the road for many of us' by Sandra Bullock. With millions of her books sold in more than forty countries, and with thirty-one international bestsellers to her credit, she is one of the world's top-selling novelists. Her first novel, The World Is Full of Married Men, was published in 1968 and established Jackie as an author who dared to step where no other female writers had gone before. Jackie was awarded an OBE in 2013 for her services to literature and charity. When accepting the honour she said to the Queen, 'Not bad for a school drop-out' - a revelation capturing her belief that both passion and determination can lead to big dreams coming true. Jackie Collins lived in Beverly Hills where she had a front row seat to the lives she so accurately captured in her compulsive plotlines. She was a creative force, a trailblazer for women in fiction and, in her own words, 'A kick-ass writer!'