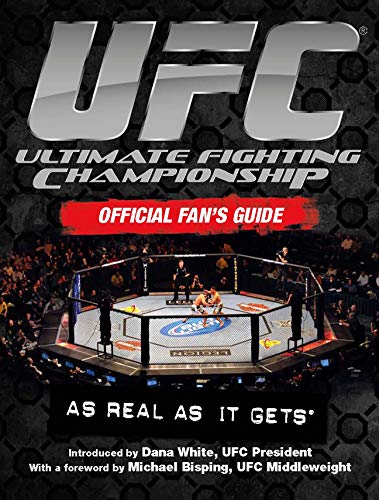 First contested in 1993, the UFC (Ultimate Fighting Championship) is a unique combat sport where elite opponents from a range of different fight backgrounds - Brazilian Jiu-Jitsu, Wrestling, Boxing, Judo, Kung Fu, Karate and Kickboxing - all compete to identify the most effective martial art in a real fight contest. The result is an incredible Mixed Martial Arts spectacle which has taken the world by storm, making it one of the world's fastest growing televised sports. To celebrate this increasing popularity, "The UFC Official Fan's Guide" is the ultimate companion to this exhilarating sport. Packed with fascinating exclusive features, striking photographs and amazing facts, it is a must for UFC fans new and old. Fully illustrated throughout with dramatic big fight images, "The Official UFC Fan's Guide" explains the rules and background of the sport, profiles its top fighters, offers a peek behind the scenes of the Championship and looks back at the UFC's greatest contests and incidents. The UFC has never been seen like this before.

Thomas Gerbasi is the Editorial Director for the Ultimate Fighting Championship and has written on combat sports for various publications for over a decade. An award-winning member of the Boxing Writers Association of America, his work has also appeared in The Independent, YahooSports.com, ESPN.com, MSNCanada, Inked, and KING magazine. Anthony B Evans attended his first UFC event in 2002, and has been covering combat sports all his professional life. A writer and publicist he worked for as varied publications as Boxing Monthly, Fighters Only, Boxing News, The Sun, the Sydney Telegraph, UFC.com and consulted on several boxing and MMA documentaries.