The Monster Evil: Policing and Violence in Victorian Liverpool 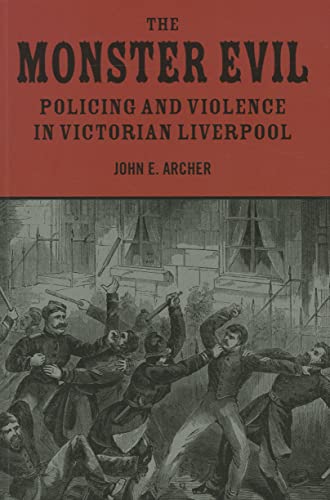 Victorian Liverpool had an unenviable reputation for violence. This book sets out to assess both the scale and variety of Liverpool's violence, and the means by which it was policed. It has been exhaustively researched and is persuasively argued. It adds significantly to the wider knowledge of, and to the debates about the history of criminal violence and of policing. Finally, it might also be read usefully by contemporary politicians and media pundits. John Archer's study "The Monster Evil" is not so much a police history in a narrow sense but rather a history of violence. Archer reconstructs Liverpool's reputation as the criminal capital of Britain during the nineteenth century. * Belegex. H-Soz-u-Kult * ... the book is well written and perceptive. The accounts are often grim, but nonetheless fascinating, and the book should appeal to a wide audience. * Journal of British Studies, Vol. 51, No. 2 * The Monster Evil is the fruit of extensive research, and the first genuinely comprehensive treatment of violent crime in this period. Archer produces much more than a `case study' of violence in Victorian England ; The Monster Evil is a powerful account, the likes of which local historians of crime would do well to imitate. * Crime, Histoire & Societes / Crime, History & Societies, Vol. 16, no 1 *

Liverpool gained a unique and notorious reputation during the 19th century for being an abnormally violent and criminal place. `The Monster Evil' intends to explore the historical foundations of this stigmatization: were the fears real or an invention of the Victorian newspapers? In answering such questions the book examines Liverpool's violent crime and how effectively it was policed by the newly established constabulary through the use of local and national press reports, contemporary accounts and police records. In doing so issues relating to public acceptance and tolerance of violence and the police will be explored. All forms of criminal interpersonal violence are described and analysed in the context of the city; including notorious murders such as the Tithebarn-street kicking of 1874, the `wholesale poisonings' by two sisters in 1883 and the killing of young children by other young children in 1855 and 1891. Everyday acts of violence in the home between family members, or in the street, whether as acts of robbery or as drunken unprovoked attacks on strangers or against the police, are also given prominence. An extract on police night shift duty by Liverpool's foremost 19th-century journalist, Hugh Shimmin, is included. The book, which covers much of the Victorian period, is based on original and extensive research. Through an examination of a wide range of `typical' case studies and news stories, which exemplify the various kinds of violent crime found in Liverpool, readers will find the book accessible, authoritative and surprising in its resonance with present day crime and its news coverage by the media.