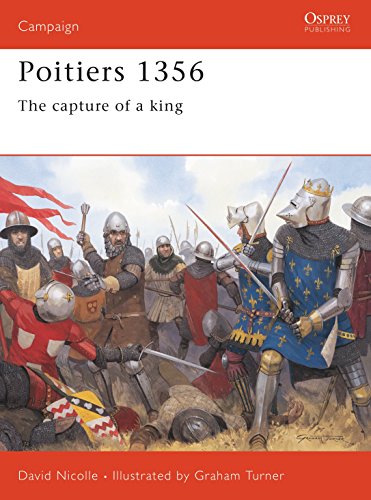 When Edward the Black Prince marched out of Gascony in August 1356, his plan was to carry out a large-scale destructive raid into the territory of the French King, John II. On 18 September, however, he was cornered south of Poitiers by a larger French army, and was left with little option but to fight. The ensuing battle proved an unmitigated disaster for the French. Their army was butchered and the King himself captured. In this volume, Dr David Nicolle details a campaign that enhanced the reputation of the Black Prince and led King John to catastrophe.

David Nicolle was born in 1944 and worked in the BBC Arabic service for a number of years. He went 'back to school,' gaining an MA from the School of Oriental and African Studies, London, and a doctorate from Edinburgh University. He has taught world and Islamic art and architectural history and written many books and articles on medieval and Islamic warfare. David has written many titles for Osprey, and currently lives and works in Leicestershire, UK. Graham Turner is a leading historical artist, specialising in the medieval period. He has illustrated numerous titles for Osprey, covering a wide variety of subjects from the dress of the 10th-century armies of the Caliphates, through the action of bloody medieval battles, to the daily life of the British Redcoat of the late 18th century. The son of the illustrator Michael Turner, Graham lives and works in Buckinghamshire, UK.