Herman, Arthur The Scottish Enlightenment: The Scots' Invention of the Modern World

The Scottish Enlightenment: The Scots' Invention of the Modern World 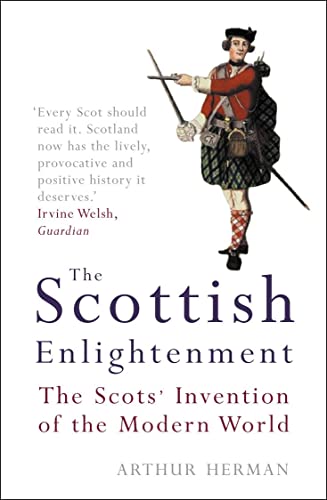 'Stimulating. A work which deserves to be bought by any interested reader.' Noel Malcolm, Sunday Telegraph

'Herman carries his thesis off with brio.' Arnold Kemp, Observer

'A sparkling book. Herman argues his case with an impressive accumulation of evidence.' New Statesman

'Every Scot should read it. Scotland now has the lively, provocative and positive history it deserves.' Irvine Welsh, Guardian

A dramatic and intriguing history of how Scotland produced the institutions, beliefs and human character that have made the West into the most powerful culture in the world.

Arthur Herman argues that Scotland's turbulent history, from William Wallace to the Presbyterian Lords of the Covenant, laid the foundations for 'the Scottish miracle'. Within one hundred years, the nation that began the eighteenth century dominated by the harsh and repressive Scottish Kirk had evolved into Europe's most literate society, producing an idea of modernity that has shaped much of civilisation as we know it. He follows the lives and work of thinkers such as Adam Smith and David Hume, writers such as Burns and Boswell, as well as architects, technicians and inventors, and traces their legacy into the twentieth century. Written with wit, erudition and clarity, The Scottish Enlightenment claims the Scots' rightful place in the history of the western world.