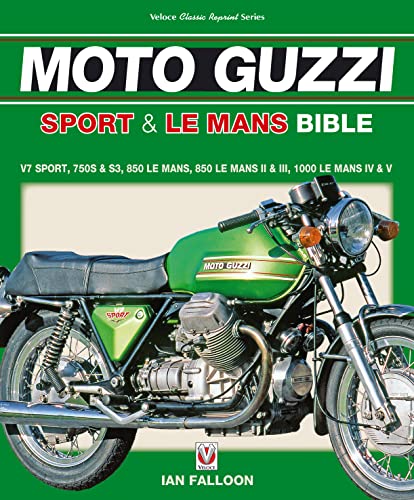 Falloon and published by Veloce whose quality motorcycle list continues to grow at a very respectable pace.By the end of the book you really do feel that you know every nut and bolt of these models as well as everything there is to know about them.' This will please the owner as will the excellent technical information at the rear. Priced at GBP29.99, like the others, it easily justifies its price by being a quality publication in both look and feel, as well as content.- Ian Kerr for inter-bike.co.uk, 2008; Author Falloon, in his intro, describes Guzzis as being just as beautiful at rest as they are on the move. It's a great read if you're really into Guzzis. Rating: 5 stars lotsa Guzzi, well done.- Motorcycle Trader, November 2007; Covering all the Tonti framed Sports bikes... copies of the 2007 first edition are currently being sold on eBay for $250! Written by Australian author Ian Falloon, and featuring a lot of Australian sourced photos. This book is highly recommended.- Guzzi Parlance.

The Moto Guzzi Sport & Le Mans Bible celebrates the iconic Moto Guzzi V7 Sport and Le Mans sporting motorcycles of the 1970s and 1980s. It tells the story of these classic bikes, which were among the first Superbikes to combine Italian style, handling, and performance.After struggling to survive during the 1960s, Lino Tonti was given the opportunity to create the V7 Sport Telaio Rosso, in 1971. It was so successful that Moto Guzzi shifted to specialize in building sporting motorcycles.Covering all models produced from 1971 to 1993 (V7 Sport, 750S, 750S3, 850 Le Mans, 850 Le Mans II, 850 Le Mans III, 1000 Le Mans IV, 1000 Le Mans V), descriptions of model development year by year, full production data, and 160 photos, this is the essential Bible for all enthusiasts.