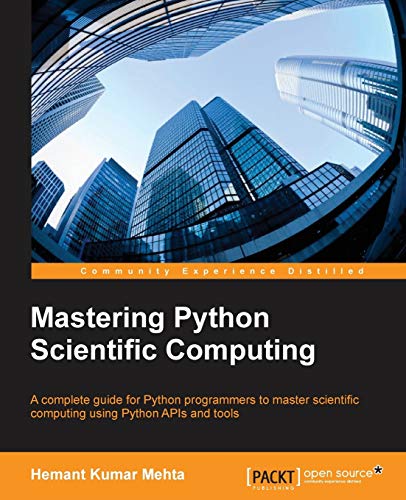 Who This Book Is For

If you are a Python programmer and want to get your hands on scientific computing, this book is for you. The book expects you to have had exposure to various concepts of Python programming.

What You Will Learn

Hemant Kumar Mehta is a distributed and scientific computing enthusiast. He has more than 13 years of experience of teaching, research, and software development. He received his BSc (in computer science) Hons., master of computer applications degree, and PhD in computer science from Devi Ahilya University, Indore, India in 1998, 2001, and 2011, respectively. He has experience of working in diverse international environments as a software developer in MNCs. He is a post-doctorate fellow at an international university of high reputation. Hemant has published more than 20 highly cited research papers in reputed national and international conferences and journals sponsored by ACM, IEEE, and Springer. He is the author of Getting Started with Oracle Public Cloud, Packt Publishing. He is also the coauthor of a book named Internet and Web Technology, published by Kaushal Prakashan Mandir, Indore. He earned his PhD in the field of cloud computing and big data. Hemant is a member of ACM (Special Interest Group on High-performance Computing Education: SIGHPC-Edu), senior member of IEEE (the computer society, STC on cloud computing, and the big data technical committee), and a senior member of IACSIT, IAENG, and MIR Labs.