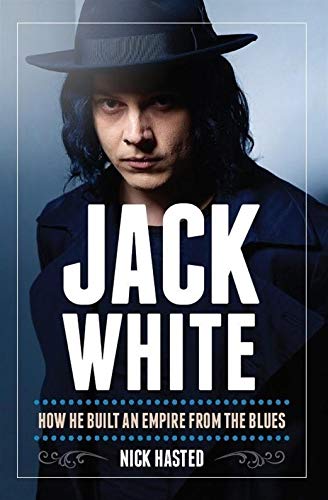 From a minor Arkansas club performance on 9/11 to 2005's thunderous anarchic Glastonbury set and beyond, here is the full unlikely saga of John Gillis, aka Jack White, rock's self-appointed agent provocateur. The story includes his musical influences, his relationship with Meg White (whose name he adopted on marrying her) interviews with collaborators Neil Young, Seasick Steve and Brendan Benson, and detailed accounts of every White Stripes, Raconteurs, Dead Weather and Jack White solo record.

This first major biography of Jack White explores the wayward life of an outsider growing up in the ruined city of Detroit who was to become an idiosyncratic rock star and founder of a highly influential independent record label. It amounts to an atmospheric and definitive account of the extraordinary musical journey of a man who has turned out to be one of 21st-century rock's most compelling figures.

Considering The White Stripes were one of the world s biggest bands when they split in 2008 and Jack White s long been one of music s most intriguing enigmas, it s barely believable that this is the first in-depth book about him. British journalist Nick Hasted does a thorough job charting White s life through his Detroit childhood and adolescence in the city s roughhouse rock underground, the rise of the duo he started with ex-wife Meg White, parallel projects such as The Raconteurs and several hairy scrapes, concluding with the successful solo career which enables his Third Man operation to thrive in his Nashville compound as an ultimate fantasy playground.

Although White s presence relies on cut-and-pasted press interviews, Hasted crucially visited Detroit to soak up the city s surreal ruins and track down friends and former band-mates. He excels on describing the mysterious blues legends who sent White on the path which led to being able to release the whole mythical Paramount catalogue in ornate cabinets.

White emerges as a complex, private figure, battling demons but relentlessly fixated with the lost blues world which, according to his friend Dylan, ruled before the insane world of entertainment exploded in our faces . A fascinating tale, told with insight, detail and evocative eloquence

...a probing and insightful account of this modern blues experimentalist s public face, and an engrossing study of how one man s success can tear a tight-knit rock scene apart. ... Part road trip diary as Hasted colourfully tours run-down Detroit and new-money Nashville in White s footsteps, and part deadly drinking game if you neck a finger every time he mentions an old blues act of no-mark Detroit scene band, the book recruits an extensive cast of White s associates to prise at the mask, exposing intriguing details... A craftsman tracing an enigma. --Mark Beaumont, Classic Rock

Jack White is a carefully cultivated mystery except when Jack White is an earnestly unscripted jackass. ... Bless Nick Hasted for trying to and pretty much in the middle distance succeeding at writing the first ever comprehensive biography of the many-headed and controversial hydra that is Jack White.

Did White have any input on it or involvement with it, or did he give approval of it? No, no, and I bet he s got it tacked to a dartboard somewhere. ... Hasted rather expertly stacks all the interview quotations on top of each other [he] wants to let the heavy quotation structure flesh out a portrait of White on its own ... [He] spends a worthwhile number of pages on digressions about the musical contribution of Son House or the philosophy expounded by Dutch neoplasticism.

Perhaps the clearest value of this biography is that it helps a new generation work backward toward some great roots. Young people may be deeply familiar and still following along with White s myriad creative projects, but their appreciation of old Detroit may dead end back at Eminem, or they may not know why bold symmetrical coloration is such an appealingly structured pattern. ... What factoids it is possible to gather about the man are in some ways the least interesting aspect of this book. Hasted is working in a territory that is both more free and more constrained than the usual biographical fodder. You can t get at any type of realism when the subject himself will barely permit impressionism. Jack White may open the floodgates, but it s unlikely to deliver any results better than this treatment of Citizen Jack

Jack White was born John Anthony Gillis in 1975 into a musical, Catholic family of 10 children in Detroit. He learned to play the guitar, drums and piano. After moonlighting in several underground Detroit bands as a drummer, White founded The White Stripes with fellow Detroit native-and then wife-Meg White in 1997. Their 2001 breakthrough album, White Blood Cells, brought them international fame with the hit single and accompanying music video, Fell in Love with a Girl. This recognition provided White opportunities to collaborate with famous artists, including Loretta Lynn and Bob Dylan. In 2006, White founded The Raconteurs with Brendan Benson, and in 2009 founded The Dead Weather with Alison Mosshart of The Kills.Definitive history of the Detroit scene in which The White Stripes first flourished, interviews with former bandmates including Brendan Benson and Third Man artists such as Neil Young and Seasick Steve.It tells the full story of the 21st century's most important rock star.