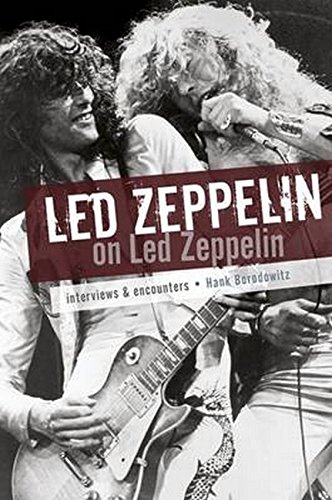 [English]
Few bands have made as much of an impact on popular and rock music than Led Zeppelin. With rumours and speculation abound, often it's hard to tell the facts from the fiction. Now, with Led Zeppelin On Led Zeppelin you can hear the truth in their own words, in interviews ranging from 1957 to 2012, this level of insight has never been seen before.
Led Zeppelin On Led Zeppelin tells the story of the British band that rocketed to stardom in the late 1960s and went on to become one of the most influential and biggest-selling rock bands of all time. Through the eyes of Robert Plant, Jimmy Page, John Paul Jones and John Bonham, the band takes shape, takes charge of the charts and changes music forever.
Any band is made up of its individual parts, but occasionally some very special musicians come together and create something that is more than the sum of its parts. Led Zeppelin On Led Zeppelin aims to encapsulate the band's mindset and creative process as they crafted some of the greatest songs and the greatest albums ever. This book will offer invaluable insight, some never seen before, into what made the band tick, and how they became the most popular band in the world.
Led Zeppelin On Led Zeppelin provides an unparalleled amount of detail and information on this most monumental of rock bands. For fans of Led Zeppelin in particular or fantastic rock music in general, this is one book you aren't going to want to miss.

"Bordowitz brings CCR's complex story to life. . . . [He] never takes sides or passes judgment yet brilliantly illuminates the tragedy of CCR's lost potential." --"Library Journal" on "Bad Moon Rising" "If "Bad Moon Rising" isn't 'the saddest story in rock 'n' roll, ' . . . it certainly comes within kissing distance." --USA Today on "Bad Moon Rising" "Bordowitz provides evenhanded treatment of highly charged issues . . . persuasively demonstrating that CCR has earned their reputation as one of the most important bands in rock history." --"Publishers Weekly" on "Bad Moon Rising" "A very thorough book." --"Mojo" on "Bad Moon Rising" "A great read for casual readers and longtime fans." --"Library Journal" on "Every Little Thing Gonna Be All Right" "An intriguing collection . . . absolutely fascinating. . . . Every entry tells the reader something of interest." --"Goldmine" on "Every Little Thing Gonna Be All Right" "Offers a rich variety of angles on the Marley legend." --"Relix" on "Every Little Thing Gonna Be All Right" "Often illuminating . . . never dull or boring." --"Nashville"" City"" Paper" on "Every Little Thing Gonna Be All Right" "I still remember listening to Led Zeppelin's debut album for the first time, the same year we recorded "Spirit In The Sky." We knew it was a game changer. I thoroughly enjoyed reading this collection of interviews with Led Zeppelin band members. Highly recommended."-- Russell DaShiell, writer, producer, lead guitarist "When Hank first approached me about my Led Zeppelin coverage from 1973 -- back when their gig at Tampa Stadium was crowned the biggest show by a single band in rock history -- I knew this wasn't gonna be just another Zep potboiler. Hank is a tenacious researcher, an obsessive rock fan, and serves a mean lunch. It's all good." --Arthur Levy, rock historian and archivist

In a series of more than 50 interviews that span seven decades, many never before seen in print, this is the story of Led Zeppelin told by the people who knew it best - the members of the band. This book shoots down the folklore and assumptions about Jimmy Page, Robert Plant, John Paul Jones, and John Bonham, and presents the band's full history, from when Jimmy Page was playing skiffle to the day the band was honoured by the Kennedy Center for their contribution to American and global culture. Led Zeppelin on Led Zeppelin captures the ideas of all of the band's members at the time they created classics like "Whole Lot of Love," "Stairway to Heaven," and "Kashmir," but also captures the idea of the band itself as it created the music that changed popular culture.