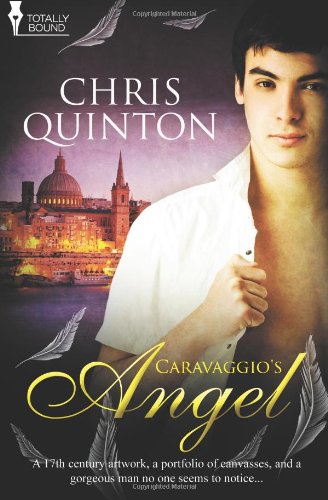 A seventeenth-century artwork, a portfolio of canvases and a gorgeous man no one seems to notice― Add in a jealous brother and a scheming stranger, and Paul has inherited trouble. Paul is estranged from his family, and inherits property on Malta from his artist great-uncle Lawrenz Calleja. It includes a portfolio of canvases Lawrenz painted over the decades, and an artwork that might be a seventeenth-century piece in the style of Caravaggio, but is more likely a symptom of his great-uncle’s obsession―the same man appears in every painting. Paul has grown up knowing that face, the man Lawrenz called Angelo. When he meets someone who matches the image exactly, Paul is hooked. Their friendship rapidly deepens into love. Angelo is in exile on the island of Malta―he has to learn compassion and love before he can return to his Father’s house. But he learns the lessons too well, and that proves dangerous. Nico has watched him for a long time, waiting for just this moment, when Angelo is at his most vulnerable. Nico gains an ally when Paul’s brother, Calvin, arrives in Malta. Calvin is convinced Paul inherited a fortune and is determined to claim a share of it. But the battle between Angelo and Nico is far more than it seems and the Calleja brothers are in danger of becoming collateral damage.

Chris started creating stories not long after she mastered joined-up writing, somewhat to the bemusement of her parents and her English teachers. But she received plenty of encouragement. Her dad gave her an already old Everest typewriter when she was ten, and it was probably the best gift she'd ever received—until the inventions of the home—computer and the worldwide web. Chris's reading and writing interests range from historical, mystery, and paranormal, to science-fiction and fantasy, writing mostly in the male/male genre. She also writes male/female novels in the name of Chris Power. She refuses to be pigeon-holed and intends to uphold the long and honourable tradition of the Eccentric Brit to the best of her ability. In her spare time (hah!) she embroiders, quilts and knits. Over the years she has been a stable lad (briefly) in a local racing stable and stud, a part-time and unpaid amateur archaeologist, a civilian clerk at her local police station and a 15th century re-enactor. She lives in a small and ancient city in the south-west of the United Kingdom, sharing her usually chaotic home with an extended family, currently only one large dog, a frilled dragon [lizard], three psychotic mice and sundry goldfish.