Blum, William America's Deadliest Export: Democracy – The Truth about US Foreign Policy and Everything Else

America's Deadliest Export: Democracy – The Truth about US Foreign Policy and Everything Else 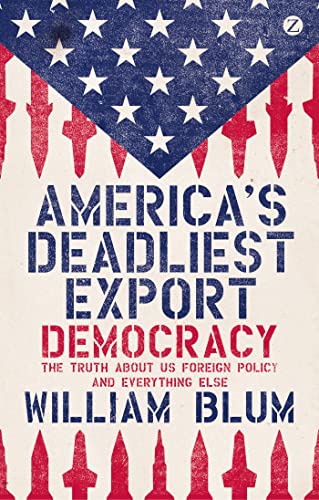 'A fireball of terse information - one of our best muckrakers.' Oliver Stone 'America's Deadliest Export is a brilliant expose of critically important information about the role of the U.S. in the world - yet that is arguably the least of its virtues. Blum's book is also passionate when it ought to be passionate, and sober when it ought to be sober. It takes the raw data of international relations and presents it so movingly, so compellingly, and so insightfully, that when it reaches out for us to act - it has put us very much in the mood to do so. Succinct and comprehensive, reasoned and also impassioned, this is a book all should read.' Michael Albert 'As in the past, in this remarkable collection Bill Blum concentrates on matters of great current significance, and does not pull his punches. They land, backed with evidence and acute analysis. It is a perspective on the world that Westerners should ponder, and take as a guideline for action.' Noam Chomsky 'With good cheer and humor Blum guides us toward understanding that our government does not mean well. Once we've grasped that, we're far more capable of effectively doing good ourselves.' David Swanson, author of War is a Lie 'Coruscating, eye-opening and essential. This is a must-read for anyone rightfully concerned at the destructive influence of the world's only superpower.' Cynthia McKinney, Presidential Candidate for the Green Party of the United States 'William Blum's America's Deadliest Export is another in his blockbuster series that has applied the reality and morality principles to work on U.S. foreign policy. This book has vignettes and longish essays on matters running from Conspiracies, Ideology and the Media to Cuba, Iran and Wikileaks. It is brimming with wit and with both laughable and frightening quotations. It is admittedly written for "the choir," but even the choir needs encouragement as well as facts and analyses that will keep its members from succumbing to a potent propaganda system. And we may hope that choir will grow with books like this that both amuse and enlighten.' Edward S. Herman, co-author of The Politics of Genocide 'This book deals with unpleasant subjects yet it is a pleasure to read. Blum continues to provide us with convincing critiques of U.S. global policy in a freshly informed and engaging way.' Michael Parenti, author of The Face of Imperialism 'If you only read one book about global politics this year make it this one.' Counterfire

'A fireball of terse information.'Oliver Stone 'A remarkable collection. Blum concentrates on matters of great current significance, and does not pull his punches. They land, backed with evidence and acute analysis.'Noam Chomsky For over sixty-five years, the United States war machine has been on automatic pilot. Since World War II we have been conditioned to believe that America's motives in 'exporting' democracy are honorable, even noble. In this startling and provocative book, William Blum, a leading dissident chronicler of US foreign policy and the author of controversial bestseller Rogue State, argues that nothing could be further from the truth. Moreover, unless this fallacy is unlearned, and until people understand fully the worldwide suffering American policy has caused, we will never be able to stop the monster.