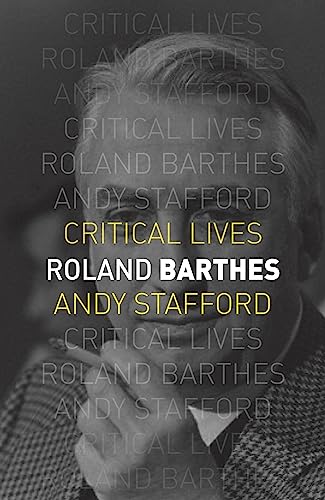 'Andy Stafford's engaging biography sheds new light on the complex interrelation of Barthes' life and work, proposing striking and subtle interpretations of a multifarious intellectual and personal trajectory. Stafford succeeds excellently in loosening Barthes from the grip of theoretical ideologies ... A major contribution to the understanding of Barthes as a theorist and as a writer.' - Patrick Ffrench, Professor of French Language and Literature, King's College London, and author of The Time of Theory: A History of 'Tel Quel' (1960-1983), The Cut: Reading Bataille's 'Histoire de l'oeil' and After Bataille: Sacrifice, Exposure, Community

Roland Barthes (1915-1980) is one of France's most important writers and theorists of the second half of the twentieth century. His volumes of essays have been translated into many languages. His work is hugely influential in the fields of semiotics, structuralism and numerous areas of the humanities. Yet Barthes' career, hampered by illness in early adulthood, was beset by a large number of false starts. After the Second World War, he started a career in the French Diplomatic Corps, tried to become a sociologist and lexicologist and worked briefly as a popular theatre activist; he was also a keen amateur musician, painter, reluctant Marxist, dilettante philosopher and editor. Yet none of these activities defines Barthes; even his academic career was highly unorthodox and he has not always been taken seriously. So how do we classify him? Andy Stafford offers a clear-sighted, readable account of Barthes' work and life. While he argues that Barthes may best be categorised as a journalist, essayist and critic, he emphasizes the social preoccupations in Barthes' writing: how Barthes continually analysed the self and society. In doing so, Stafford also provides a fascinating account of the intellectual scene of post-war France. This cogent introduction to a vital figure will interest students and specialists alike.