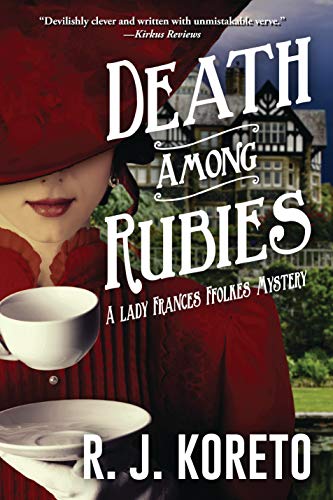 Praise for Death Among Rubies: "Koreto's appealing sequel...nicely blends international intrigue and affairs of the heart." ---Publishers Weekly "Koreto's second case for his titled heroine is devilishly clever and written with unmistakable verve." --Kirkus Reviews "Koreto skillfully contrasts the feminist milieu of 1907 England with the establishment class structure. Lady Frances and Mallow are an effective pairing." --Booklist "A charming Edwardian mystery with a delightfully unconventional heroine...Fans of Rhys Bowen, Charles Todd and Jacqueline Winspear are sure to enjoy." --Shelf Awareness "A very enjoyable series... Koreto has definitely made a mark in the writing world: He is a superb writer of the beloved upstairs/downstairs mystery." --Suspense Magazine Praise for the Death on the Sapphire: "Upstairs teams with downstairs in this thoroughly entertaining, witty Edwardian mystery debut... A solid choice for fans of Robin Paige and Downton Abbey." --Library Journal "[A] refreshing debut... Readers will look forward to seeing more of Frances in the promised sequel." --Publishers Weekly "Lady Frances is a strong, clever protagonist, in the mold of Frances Brody's Kate Shackleton and Jacqueline Winspear's Maisie Dobbs.Lady Frances is a strong, clever protagonist, in the mold of Frances Brody's Kate Shackleton and Jacqueline Winspear's Maisie Dobbs." --Booklist "Fans of both Downton Abbey and Agatha Christie will embrace the subtly witty, refreshingly unconventional heroine in Koreto's debut series." --RT Book Reviews "I loved every minute... With a memorable heroine, rich atmosphere, and intriguing mystery, Koreto has created a book that will engage and entertain readers. I eagerly await book 2. Highly recommended!" --Historical Novel Society, Editor's Choice "An intelligent and engrossing historical novel with an wonderfully independent heroine (of the right social class!) and her enterprising maid. But it is by no means a cozy story, delving into the grim realities of war." --Rhys Bowen, New York Times bestselling author of the Molly Murphy and Royal Spyness mysteries "R. J. Koreto introduces a delightful new heroine with Lady Frances Ffolkes. Everyone underestimates Lady Frances and usually to their dismay. You'll love reading about her adventures as she takes time out from her efforts in the Women's Suffrage movement to solve the murder of an old friend." --Victoria Thompson, bestselling author of Murder in Morningside Heights "What a fun read, good storytelling that whisks along at a cracking pace, neatly plotted with a satisfying ending. Lady Frances Ffolkes is irresistible--caring, clever and resourceful. I look forward to meeting her again many times." --M.R.C. Kasasian, author of the Gower Street Detective series "A memorable heroine--a young suffragette--and her equally dauntless maid engage in a battle of wits against the Establishment that is ready to kill to keep the truth buried. An enjoyable read." --Carola Dunn, author of the Daisy Dalrymple mysteries "Spirited and tenacious, Lady Frances Ffolkes is a force to be reckoned with as she endeavors, undaunted by all obstacles, to find a missing manuscript and solve the murder of a family friend in this charming Edwardian-era mystery. With Death on the Sapphire, R.J. Koreto has given us a winning heroine and a thoroughly delightful read." --Ashley Weaver, author of the Amory Ames mysteries "Suffragette Lady Frances Ffolkes takes readers on a spirited journey to locate a stolen manuscript and solve the murder of a family friend. Witty, tenacious, and thoroughly engaging." --Anna Lee Huber, award-winning and national bestselling author of the Lady Darby mystery series

Lady Frances Ffolkes is incensed when she finds out that her dear friends Gwendolyn and Thomasina have been subject to vicious threats. Promising to uncover their attacker, she travels with them to Kestrel's Eyrie, the fabled estate belonging to Gwen's family. But soon Frances faces an even greater problem, when Gwen's father, a powerful diplomat, is stabbed to death with his prized ruby dagger. Frances, with her loyal maid June Mallow at her side, jumps right into interrogating the estate's numbered guests: a charming Turkish diplomat with a habit of sneaking off into the night, a brash American heiress with lofty dreams of becoming mistress of the Eyrie, two gossiping widows with their own scandalous secrets, and Gwen's own aunt tasked with keeping the affairs of the estate in order among the chaos of the investigation. But as the case unfolds, Frances's righteous conviction might just be the very thing that leads danger--and even more death--to her own doorstep. Old sins do indeed cast long shadows in Death Among Rubies, a delightful closed-room mystery in the vein of Agatha Christie and the second in R.J. Koreto's effortlessly charming historical series.