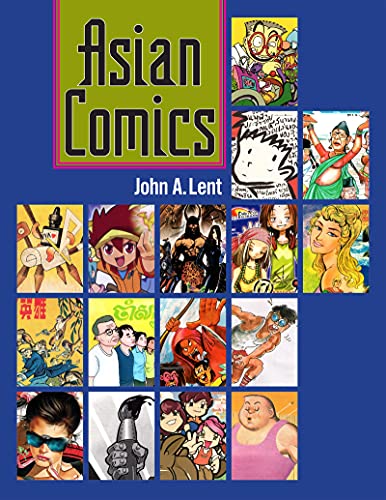 "Lent has brought comics studies into the mainstream and gone worldwide. This is an amazing feat, covering so many different cultural contexts on various continents. A particularly valuable contribution has been his journal, International Journal of Comic Art, a doughty biannual which he founded in 1999, which has scoured the world, and which he puts together more or less solo. His knowledge of Asian comics, much of it gathered during tireless travel to China and elsewhere, is unparalleled." --David Kunzle, author of numerous books on comics history, including Rodolphe T pffer: The Complete Comic Strips, Father of the Comic Strip: Rodolphe T pffer, and Gustave Dor Twelve Comic Strips (all published by University Press of Mississippi)

Grand in its scope, Asian Comics dispels the myth that, outside of Japan, the continent is nearly devoid of comic strips and comic books. Relying on his fifty years of Asian mass communication and comic art research, during which he traveled to Asia at least seventy-eight times and visited many studios and workplaces, John A. Lent shows that nearly every country had a golden age of cartooning and has experienced a recent rejuvenation of the art form.

The first overview of Asian comic books and magazines (both mainstream and alternative), graphic novels, newspaper comic strips and gag panels, plus cartoon/humor magazines, Asian Comics brims with facts, fascinating anecdotes, and interview quotes from many pioneering masters, as well as younger artists.