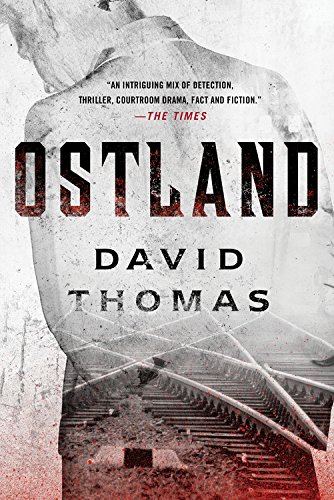 "A thought provoking account of an ordinary person's capacity to do evil... a fascinating, important book."--Literary Review

"An ambitious and very powerful novel that reflects the ultimate incomprehensibility of the Holocaust."--Michael Carlson, Crimetime

"Very rarely do books reach into your psyche and take root. Ostland came along and kicked my door down. A wonderfully thought-provoking novel. Educational, entertaining and emotive throughout... a first class read by an author at the top of their game."--Crimesquad

"With subtlety and intelligence, Thomas joins the historical dots to produce a novel with plenty to say--eloquently--about the brutalising effects of the Holocaust."--John O'Connell, The Guardian

"[It] encompasses the very best elements of both the crime and historical fiction genres. . . This is a novel that unerringly stimulates the thoughts and emotions of the reader, compounded by the harsh realities of human history that form its foundation. A mesmerising if unsettling read."--Raven Reads Top 5 Crime Novels of 2013

Based on a horrifying true story of one of the Holocaust's worst Nazi war criminals, this novel combines a police procedural, a courtroom thriller, and a fast-paced war-time narrative.
In wartime Berlin the brilliant, idealistic young detective Georg Heuser joins the Murder Squad in the midst of the biggest manhunt the city has ever seen. A killer is slaughtering women on S-Bahn trains and leaving their battered bodies by the tracks. Heuser must confront evil eye-to-eye to track down the murderer.
Soon after the case is solved, with the winds of world war stirring, Heuser is promoted by the SS and ultimately sent off to oversee the systematic murder of tens of thousands of Jews in the conquered region to the east the Nazis call Ostland.

Nearly twenty years after the end of the war Heuser thinks his diabolical past has been forgotten, but an enterprising young lawyer, Paula Siebert, searching through Soviet archives, discovers evidence of Heuser's wartime crimes.
Tried in the early 1960s along with other ex-Nazi officers as a war criminal, the wily Heuser deploys his training as a lawyer and years as a police detective to try and distance himself from his co-conspirators and thereby escape justice.