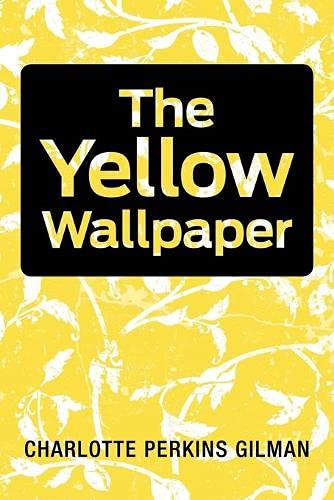 Charlotte Perkins Gilman's 1892 short story, "The Yellow Wallpaper" is a valuable piece of American feminist literature that reveals attitudes toward the psychological health of women in the nineteenth century. Diagnosed with "temporary nervous depression - a slight hysterical tendency" by her physician husband, a woman is confined to an upstairs bedroom. Descending into psychosis at the complete lack of stimulation, she starts obsessing over the room's yellow wallpaper: "It is the strangest yellow, that wall-paper! It makes me think of all the yellow things I ever saw - not beautiful ones like buttercups, but old foul, bad yellow things. But there is something else about that paper - the smell! ... The only thing I can think of that it is like is the color of the paper! A yellow smell."

Charlotte Perkins Gilman (1860-1935) was a prominent American sociologist, novelist, writer of short stories, poetry, and nonfiction, and a lecturer for social reform. She was a utopian feminist during a time when her accomplishments were exceptional for women, and she served as a role model for future generations of feminists because of her unorthodox concepts and lifestyle. Her best remembered work today is her semi-autobiographical short story, "The Yellow Wallpaper", which she wrote after a severe bout of post-partum depression.