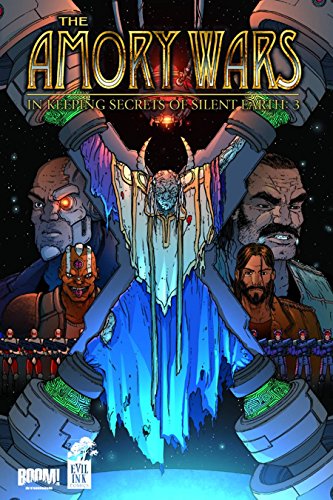 (W) Claudio Sanchez, Peter David (A) Chris Burnham The greatest battle the Keywork has ever seen is found here, in the second volume of the epic series from Coheed and Cambria frontman Claudio Sanchez and comics legend Peter David! Inferno leads his forces against Wilhelm Ryan and Mayo Deftinwolf's Red Army. But when the dust settles, the war ain't over!

Claudio Sanchez is the frontman for the acclaimed rock band Coheed and Cambria, as well as the writer/creator of the hit comic book series KILL AUDIO. Peter David is a prolific author whose career, and continued popularity, spans nearly two decades. He has worked in every conceivable media: Television, film, books (fiction, non-fiction and audio), short stories, and comic books, including a twelve-year run on THE INCREDIBLE HULK, a run on WOLVERINE, several episodes of BABYLON 5, and many of the best-loved STAR TREK novels.