Verwandte Artikel zu Tabula Rasa: A Crime Novel of the Roman Empire (The...

Tabula Rasa: A Crime Novel of the Roman Empire (The Medicus Series) 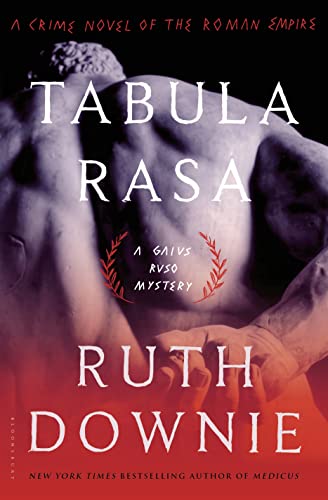 Places Downie alongside such established masters of the Roman historical as Steven Saylor and Rosemary Rowe. (Publishers Weekly (starred review))

A pleasure to read. The Ruso series might not be as well known as, say, Lindsey Davis' longer-running Marcus Didius Falsco series, but it's just as entertaining. (Booklist)

Ruth Downie ranks among the very best of today's generation of Roman writers; by far and away the most obvious inheritor of Rosemary Sutcliff's honoured mantle. Ruso is a complex, engaging, utterly human medic, straddling the line between occupiers and occupied in the divided lands of Britannia with panache and good-humoured compassion. With a finely wrought plot, a densely woven cast of characters and plenty of action, this is a book to savor to the last sentence. (M.C. Scott, author of the Rome and Boudica series)

It makes book reviewing easy when you realize you are reading for pleasure! A superb evocation of the harsh life of Romans and rebels in the bandit-country of England while building Hadrian's Wall. Ruth Downie shows why she's considered the best of the Roman mystery writers. A crime writer to watch with a matchless style. Look out, Lindsey Davis! (Michael Jecks, author of the Knights Templar series)

Excellent-a well-constructed murder mystery that skillfully brings Roman Britain to life. You feel that you are there in the cramped hospitals of the Roman forts or out in the bleak northern countryside watching the flickering flames of the Samain festival. The story is told with Ruth Downie's usual quirky humor and a nod towards the present day health services - the sly references to targets and quotas are very much part of the fun of the book. This is story-telling of a high order-an immensely enjoyable read. (L.C. Tyler, author of The Herring-Seller’s Apprentice)

Downie writes with quiet authority and surprising depth, offering an engaging depiction of an obscure slice of history. (Kirkus Reviews)

The medicus Ruso and his wife, Tilla, are back in the borderlands of Britannia, where he is tending the builders of Hadrian's Great Wall. Having been forced to move off their land, the Britons are distinctly on edge and are still smarting from the failure of a recent rebellion that claimed many lives.

The tension grows when Ruso's recently arrived clerk goes missing and things go from bad to worse when the young son of a local family also vanishes. While struggling to keep the peace between the Britons and the Romans, Ruso and Tilla uncover an intricate deception involving slavery and fur trappers, and it becomes imperative that they solve the mystery of the two disappearances before it's too late.