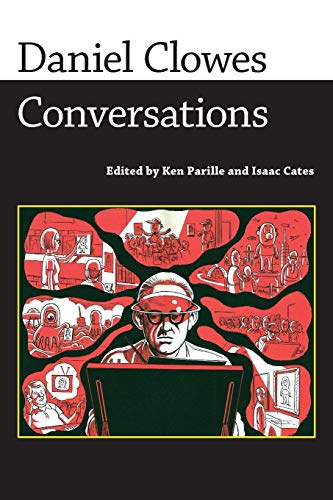 Daniel Clowes (b. 1961) emerged from the "alternative comics" boom of the 1980s as one of the most significant cartoonists and most distinctive voices in the development of the graphic novel. His serialized Eightball comics, collected in such books as David Boring, Ice Haven, and Like a Velvet Glove Cast in Iron, helped to set the standards of sophistication and complexity for the medium. The screenplay for Ghost World, which Clowes co-adapted (with Terry Zwigoff) from his graphic novel of the same name, was nominated for an Academy Award. Since his early, edgy Lloyd Llewellyn and Eightball comics, Clowes has developed along with the medium, from a satirical and sometimes vituperative surrealist to an unmatched observer of psychological and social subtleties. In this collection of interviews reaching from 1988 to 2009, the cartoonist discusses his earliest experiences reading superhero comics, his time at the Pratt Institute, his groundbreaking comics career, and his screenplays for Ghost World and Art School Confidential. Several of these pieces are drawn from rare small-press or self-published zines, including Clowes's first published interview. He talks at length about the creative process, from the earliest traces of a story, to his technical approaches to layout, drawing, inking, lettering, and coloring. These interviews reveal a thoughtful artist, deeply interested in the history of comics and the potential of the medium. An assistant professor of English at East Carolina University, Ken Parille is the author of Boys at Home: Discipline, Masculinity, and 'The Boy-Problem' in Nineteenth-Century American Literature. A lecturer in English at the University of Vermont, Isaac Cates has published in Indy Magazine, International Journal of Comic Art, ImageText, and many other periodicals.

Collected interviews with the alternative artist who created Lloyd Llewellyn and Eightball comics, as well as screenplays for Ghost World and Art School Confidential