Buchholz, Margaret Thomas New Jersey Shipwrecks: 350 Years in the Graveyard of the Atlantic

New Jersey Shipwrecks: 350 Years in the Graveyard of the Atlantic 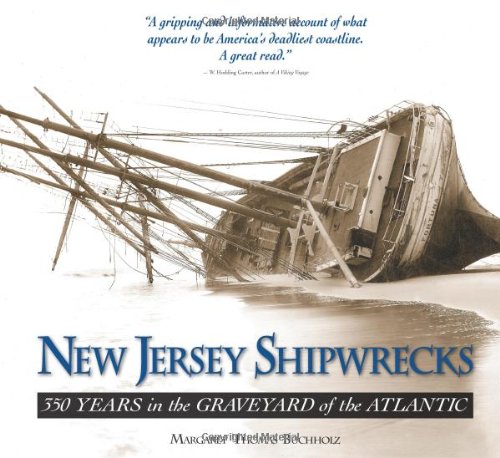 Winner of the Foundation for Coast Guard History’s award for “a brilliantly researched chronicle of shipwrecks along the New Jersey Shore from 1642 to the present day.” New Jersey Shipwrecks takes us on a gripping voyage through the “Graveyard of the Atlantic,” a name bestowed upon the state’s treacherous shoals and inlets. Before this coastline became a summer playground of second homes and resort beaches, it was a wild frontier of uninhabited and shifting sandbars. From the days of sail to steam and oil, ships (and submarines) have been drawn to this coast. And, for thousands of vessels, it became their final resting-place.Early rescuers braved the seas in small boats, using simple buoys and rope to help the wreck victims. Others invented new technologies to assist in rescues. Quoting from original letters and reports, Shipwrecks reveals the sense of duty and honor which prevailed in these brave rescuers. Many devoted their lives — literally — to help save others whose lives were turned upside down in stormy Atlantic waters.From the early wrecks of the 18th century to the present day, the life-and-death drama of maritime disasters is captured in Shipwrecks, along with the history of the U. S. Lifesaving Service (later to become the Coast Guard), lighthouses, legends, and true accounts of heroism.142 historic photographs and illustrations are displayed in this quality, large-format softcover. The book includes a detailed listing of the wrecks along the New Jersey Shore, as well as an index and bibliography.

“A gripping and informative account of what appears to be America's deadliest coastline. After reading New Jersey Shipwrecks, you'll never look at the Jersey Shore as before. Thank God for modern engines and GPS. A great read.” — W. Hodding Carter, author of A Viking Voyage and Stolen Water: Saving the Everglades from its Friends, Foes and Florida “A book of historic importance .... vivid and powerful accounts of life and death. It reads like an engrossing novel. I was swept away.” — Sharon J. Wohlmuth, New York Times best-selling co-author of Sisters, Mothers and Daughters and Best Friends “Gripping tales are recounted in stunning detail. The writing is crisp and numerous illustrations are dramatic. Once you start reading Shipwrecks, you will not put this book down.— Gary Jobson, championship sailor, America’s Cup Hall of Fame inductee, ESPN and Athens Olympics sailing commentator.“New Jersey Shipwrecks offers a marvelous and detailed unveiling of an underwater world that combines dream and nightmare in equal measure.” — Madeleine Blais, Professor of Journalism, University of Massachusetts; author of the national best-seller In These Girls, Hope Is A Muscle “A well-written and wonderfully illustrated book that recounts the fascinating and often frightful stories of the major shipwrecks and disasters along the treacherous New Jersey coast.” — Robert M. Browning Jr., Chief Historian, U.S. Coast Guard “A riveting chronology of horrors and heroism [and] an engrossing narrative that covers over three centuries of maritime disasters, filled with the suffering of the victims, the occasional selfishness of the cowards and opportunists, and the selfless courage of the rescuers. It is history as a ‘page turner'!” — J. Revell Carr, author of All Brave Sailors; former president and director of Mystic Seaport