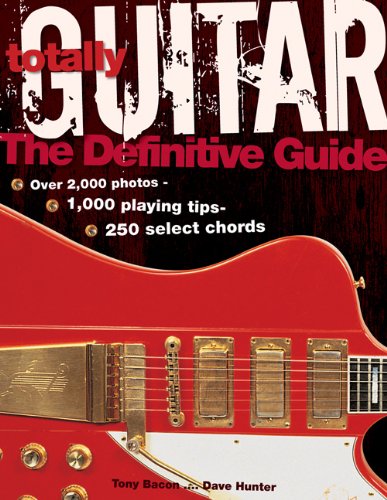 Totally Guitar is the most complete guide ever for the modern guitarist. This fascinating guide will help you to discover some great new playing styles, learn all the inside info on the coolest amps and greatest guitars, and understand how your favorite instruments work. Whether you're a beginner or advanced player, this amazing collection will provide everything you need to know about the guitar, in one massive, unique, information-packed book.

* Tony Bacon is a leading music author whose books include The Ultimate Guitar Book, 50 Years of Fender, London Live, The History of the American Guitar, and 50 Years of the Gibson Les Paul.
* Dave Hunter is an American musician and journalist now based in London and a former editor The Guitar Magazine. He has contributed to numerous publications and TV and radio documentaries, and he is a leading reviewer of guitar amplification.
* Other outstanding contributors include Ghanian guitarist Kari Bannerman, designer and builder Robert Benedetto, classical guitarist David Braid, author and music reviewer David Burrluck, Nashville-based author, songwriter, and musician Walter Carter, ?guitar guru” Paul Day, and others.
* Find out the importance of design and materials, like how maple accentuates the higher frequencies to produce

Tony Bacon is a leading writer on the guitar and is the author of The Ultimate Guitar Book, and The Fender Book, which have combined sales of more than 300,000 copies. He has edited and/or contributed to many other books, including Classic Guitars of the Fifties, Classic Guitars of the Sixties, and The New Grove Dictionary of Musical Instruments. He makes his home just outside London, England.

Dave Hunter was born and raised in Cincinnati, Ohio, and now makes his home in England, where he is a professional journalist and musician. He is the former editor of The Guitar Magazine. For the past 3 years he has been a recent research contributor and commentator for several television and radio programs on the guitar.