Meditations for a New Earth 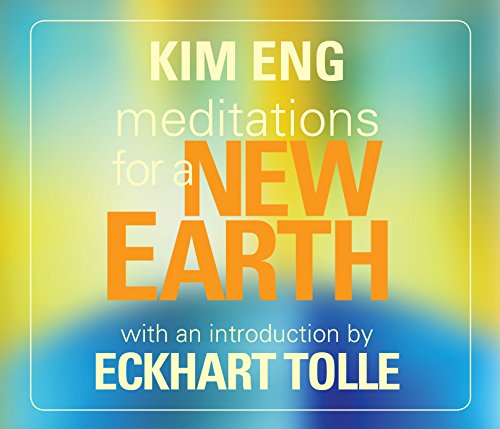 One of the most telling signs that we are creating what Eckhart Tolle calls a new earth is the increasing interest in meditation. Once a practice intended for monks and ascetics, meditation is now open to everyone as a powerful pathway to awakened consciousness. On Meditations for a New Earth, Eckhart's teaching partner Kim Eng presents eight guided practices that let you go deeper into the formless awareness that has already awakened within you. Whether you are an experienced meditator or just starting out, Kim Eng brings you two CDs of valuable insights and techniques, including: How to structure your practice so you are not doing meditation, but instead allowing it to give rise to presence; Eight guided meditations, including practices for dissolving the pain-body, breathing, meditating in nature, and more. Ten mini-meditations to turn your daily routine into an opportunity for awakening; How to experience the true purpose of meditation: opening to a life of spacious awareness. If you're like millions of readers, you may wonder how you can participate in the transformation of consciousness that Eckhart Tolle describes in A New Earth. Now with Meditations for a New Earth, you can discover a series of powerful and time-honored practices for liberating your awareness from the labyrinth of thought and opening to a state of pure presence.

Kim Eng is a counselor and spiritual teacher whose “Presence Through Movement” workshops focus on the integration of mind, body, and spirit. As Eckhart Tolle’s teaching partner, she has helped translate his ideas into a structured practice.

Spiritual teacher and author Eckhart Tolle was born in Germany and educated at the Universities of London and Cambridge. At the age of twenty-nine, a profound inner transformation radically changed the course of his life. The next few years were devoted to understanding, integrating, and deepening that transformation, which marked the beginning of an intense inward journey. Later, he began to work in London with individuals and small groups as a counselor and spiritual teacher. Since 1995 he has lived in Vancouver, Canada.

Eckhart Tolle is the author of the #1 New York Times bestseller The Power of Now(translated into 33 languages) and the highly acclaimed follow-up A New Earth, which are widely regarded as two of the most influential spiritual books of our time.

Eckhart’s profound yet simple teachings have already helped countless people throughout the world find inner peace and greater fulfillment in their lives. At the core of the teachings lies the transformation of consciousness, a spiritual awakening that he sees as the next step in human evolution. An essential aspect of this awakening includes transcending our ego-based state of consciousness. This is a prerequisite not only for personal happiness but also for the ending of violent conflict endemic on our planet.

Eckhart is a sought-after public speaker and teaches and travels extensively throughout the world. Many of his talks, intensives, and retreats are published on CD and DVD. Most of the teachings are given in English, but occasionally Eckhart also gives talks in German and Spanish. In addition to The Power of Now and A New Earth, Eckhart has written a book designed for meditative reading entitledStillness Speaks. A book consisting of selections from The Power of Now entitledPracticing the Power of Now is also available. For more information on Eckhart Tolle, please visit eckharttolle.com.