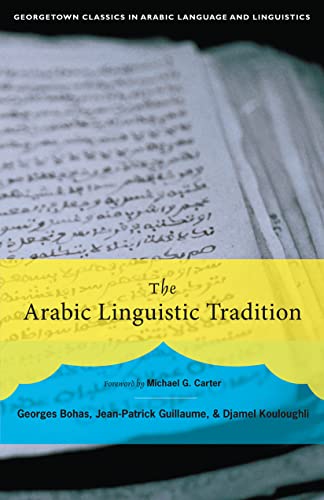 Since The Arabic Linguistic Tradition was published in 1990, the field of Arabic linguistics has grown significantly. New journals, societies, and professional groups are flourishing as more contemporary linguists pursue the study of the Arabic language and its origins. This book remains a touchstone in the field of Arabic linguistics. It is one of the first books to cover the whole range of language in Arabic culture and to offer a historical linguistic survey of the Arabic language from Classical to Modern Standard Arabic. The expert authors discuss pure grammatical theory as well as the context of language as it is used in religion, literature, law, and other disciplines. The Arabic Linguistic Tradition presents a concise overview of the most important issues in theoretical and speculative linguistics in the Arabic tradition, from their origins in the eighth century through the codification of grammar in the tenth century to its decline in the fifteenth century. This volume represents the highest level of scholarship in English on phonological, morphological, syntactic, and semantic theory as they were developed by the major Arabic grammarians including Sibawayhi and al-Khalil ibn Ahmad. Graduate students and scholars of Arabic linguistics and historical linguists will find this book to be a timeless classic.