Charlotte Perriand: A Life of Creation 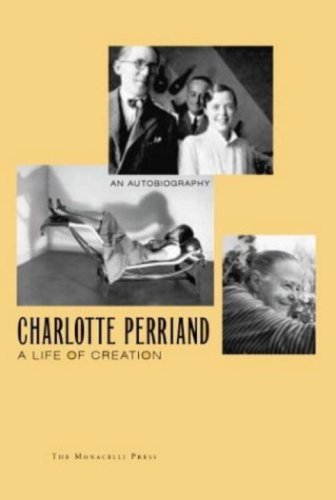 In 1927, the French designer Charlotte Perriand -- then only twenty-four years old -- won instant acclaim for her design for the "Bar sous le toit" (bar in the garret), shown at the Salon d'Automne in Paris. The project brought her to the attention of Le Corbusier and Pierre Jeanneret, who asked Perriand to join their atelier. There she was put in charge of the furniture and fittings program and worked on such legendary designs as the sculptural chaise longue, the grand confort chair, and the fauteuil ? dossier basculant (sling chair).

Well known for her fundamental contribution to modern design, Perriand's adventurous life is somewhat more of an enigma. Her autobiography, Charlotte Perriand: A Life of Creation -- published in France in 1998 -- is the first major English-language volume on her career and personal history. Immediate and matter of fact, the text echoes Perriand's own direct character; the dozens of black-and-white photographs are for the most part drawn from her own archive.

In addition to her association with Le Corbusier, Perriand recounts her experiences in Russia, the Far East, and South America; she also discusses the projects she worked on after leaving Le Corbusier's atelier in 1937, ranging from a vast ski resort at Les Arcs to the "espace thé" (tea area) in the UNESCO garden in Paris. Her friendships with the great artists of the period, such as Fernand Léger, offer valuable insight into the artistic scene of the time. Perriand's fascinating memoir is unique not only in its firsthand depiction of the goals and tenets of the heroic period of modern architecture but also in its portrayal of a century of life in Paris.

\Charlotte Perriand was born in Paris in 1903. She worked as an architect and designer, both on her own and in collaboration with many leading architects of the modern movement, including Le Corbusier, Pierre Jeanneret, Jean Prouvé, and Paul Nelson. Perriand died in 1999.