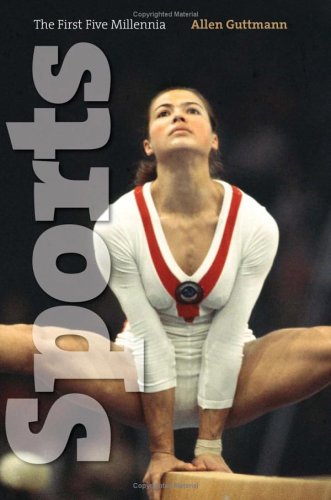 "Allen Guttmann has consistently produced works that are at the forefront of investigations of 'sport' as an immensely significant social, cultural, and political phenomenon. Sports: The First Five Millennia carries that tradition forward. With insight, thoroughness, and the remarkable range of knowledge for which he is well known, Guttmann has provided another excellent work. Of all the leading historians of sport in the world, I know of only one or two who might have come close to accomplishing what he has produced herein - and none who would have done so in such a readable manner." - Roberta J. Park, editor of From "Fair Sex" to Feminism: Sport and the Socialization of Women in the Industrial and Post-Industrial Eras"

From ancient Egyptian archery and medieval Japanese football to contemporary American baseball, every sport has been shaped by - and in turn has helped shape - the culture of which it is a part. Yet as Allen Guttmann shows in this far-ranging study, for all their differences sports throughout the ages have exhibited many common characteristics. They have always been a domain for the cultivation of gender roles, for example, as well as for the enactment of class and ethnic identities. They have also followed a similar historical trajectory from traditional to modern forms. Written in entertaining, accessible prose and illustrated with dozens of images, Sports: The First Five Millennia traces this evolution across continents, cultures, and historical epochs to present a single comprehensive narrative of the world's sports. Beginning with a discussion of what constitutes a sport - and what does not - Guttmann explores the vast variety of sports played by the preliterate peoples of the Americas and Africa, by the Greeks and Romans of antiquity, and in premodern China and Japan as well as in Islamic Asia and medieval Europe. These traditional sports include everything from Cherokee stickball and Chinese kite-flying to Persian wrestling and English bear-baiting. Guttmann then turns his attention to modern sports, an invention of eighteenth-century England that spread throughout the world during the nineteenth century and became institutionalized during the twentieth. Marked by an adherence to codified rules and increasingly governed by international organizations such as the Federation Internationale de Football Association and the International Olympic Committee, modern sports have all but displaced their traditional antecedents throughout the world. The book concludes with a look at how skateboarding, hang gliding, and other "postmodern" sports have resisted the transition from spontaneous play to institutionalized contest, only to succumb in the end to the lure of modernization.