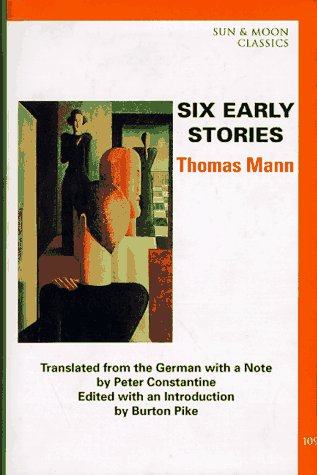 Buchbeschreibung Translated from the German with a note by Peter Constantine. Edited with an introduction by Burton Pike. Los Angeles : Sun & Moon Press, 1997, 1997. , 128pp., good but scuffed dust-jacket, good green cloth, light wear Contains early stories, not previously translated into English: A vision, "prose sketch" - Fallen - The will to happiness - Death - Avenged, "study for a novella" - Anecdote. - When they think of the stories of the great German writer Thomas Mann most American readers will recall Stories of Three Decades, translated in 1936; however, that edition purposely excluded several early tales of Mann which the translator found "tentative and awkward efforts." As noted translator and editor of this volume Burton Pike notes, however, "Times and interests change; in 1936 Thomas Mann, in exile from Nazi Germany, was celebrated as a leading spokesman for the threatened humanistic values of Western civilization." His early development seemed unimportant within that context, but such a judgment now seems arbitrary and wrong. / Indeed the six stories of this volume are all quite wonderful examples of the genre, and even more revelatory with regard to Mann s themes and styles. Experimenting with a complex, multi-layered narrative, Mann explored new approaches to the psychologies of his characters with a "strong, fresh voice of a major talent.". ISBN 1557132984. Artikel-Nr. 38689