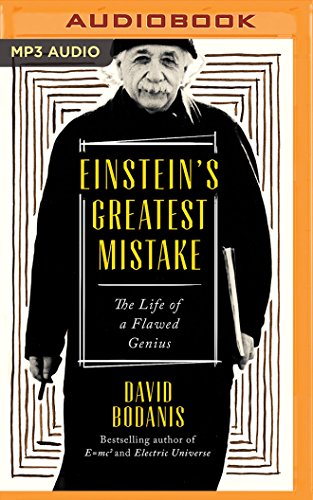 From the bestselling author of E=mc2, a brisk, accessible biography of Albert Einstein that reveals the genius and hubris of the titan of modern physics.

Widely considered the greatest genius of all time, Albert Einstein revolutionized our understanding of the cosmos with his general theory of relativity and helped to lead us into the atomic age. Yet in the final decades of his life he was also ignored by most working scientists, his ideas opposed by even his closest friends.

As renowned writer David Bodanis explains in Einstein’s Greatest Mistake, this stunning downfall can be traced to Einstein’s earliest successes and to personal qualities that were at first his best assets. Einstein’s imagination and self-confidence served him well as he sought to reveal the universe's structure, but when it came to newer revelations in the field of quantum mechanics, these same traits undermined his quest for the ultimate truth. Bodanis traces the arc of Einstein’s intellectual development across his professional and personal life, showing how Einstein’s conviction in his own powers of intuition proved to be both his greatest strength and his ultimate undoing. An intimate and enlightening biography of the celebrated physicist, Einstein’s Greatest Mistake reveals how much we owe Einstein today—and how much more he might have achieved if not for his all-too-human flaws.

DAVID BODANIS studied mathematics, physics, and history at the University of Chicago, and for many years taught the "Intellectual Tool-Kit" course at Oxford University. The author of many books including the New York Times bestseller The Secret House and E=mc2, which was adapted into the PBS NOVA documentary Einstein's Big Idea, he is also a futurist and business advisor who has worked for the Royal Dutch Shell Scenario Prediction unit, modelling economic futures, as well as for the future planning unit at the World Economic Forum. He has been a popular speaker at TED conferences and at Davos, and most recently helped run an international study for the UK Treasury on the future of high-frequency trading. Bodanis's work has been published in the Financial Times, the Guardian, and the New York Times. He lives in London.