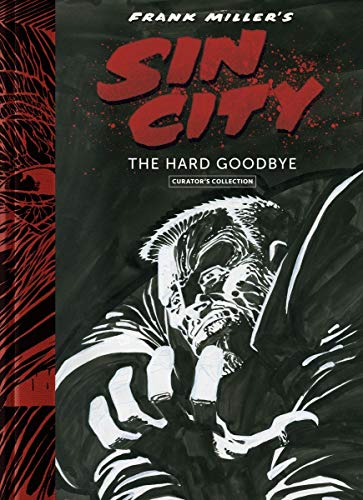 This Limited edition features an alternate cover and is signed by Frank Miller in pencil on a special tipped-in image not included in the regular edition. Limited to 500 copies worldwide, this version is for the discerning collector!

Frank Miller is arguably the most important cartoonist (writer AND artist) working in comics over the last 25 years. Mr. Miller is back in the spotlight with the release of DC's Dark Knight III: The Master Race in late 2015. Frank Miller's Sin City: The Hard Goodbye Curator's Collection includes the entire Eisner Award-winning graphic novel, now scanned from the original artwork in Frank Miller's personal archives and reproduced at the actual size he originally drew it.

Twenty-five years after its first publication in the pages of Dark Horse Presents, get ready to experience one of the most groundbreaking graphic novels of all time as few have ever seen it! Produced and assembled under the Kitchen Sink Books/Dark Horse Books imprint, Frank Miller's Sin City: The Hard Goodbye Curator's Collection showcases the entire Eisner Award-winning graphic novel, now scanned from the original artwork in Frank Miller's personal archives and reproduced at full size. Introduction by film director Robert Rodriguez, with an afterword by Dark Horse publisher Mike Richardson and an interview about the artistic process with Frank Miller!

"Miller [is] the most important comic book artist of the last 25 years." -Los Angeles Times

Frank Miller began his career in comics in the late 1970s, first drawing then writing Daredevil for Marvel Comics, creating what was essentially a crime comic disguised as a superhero book. It was on Daredevil that Miller gained notoriety, honed his storytelling abilities, and took his first steps toward becoming a giant in the comics medium. After Daredevil came Ronin, a science-fiction samurai drama that seamlessly melded Japanese and French comics traditions into the American mainstream; and after that, the groundbreaking and acclaimed Batman: The Dark Knight Returns and Batman: Year One, both of which not only redefined the classic character, but also revitalized the industry itself. Finally able to fulfill his dream of doing an all-out, straight-ahead crime series, Miller introduced Sin City in 1991. Readers responded enthusiastically to Miller's tough-as-leather noir drama, creating an instant sales success. His multi-award-winning 300 series from Dark Horse, a telling of history's most glorious and underreported battle, was brought to full-blooded life in 1998. In 2001, Miller returned to the superhero genre with the best-selling Batman: The Dark Knight Strikes Again. Frank Miller continues to push the medium into new territories, exploring subject matter previously untouched in comics, and his work consistently receives the highest praise from his industry peers and readers everywhere. In 2005, with the hugely successful Sin City movie release, co-directed with Robert Rodriguez, Miller added a director's credit to his already impressive resumé and introduced his characters to an entirely new legion of fans worldwide.