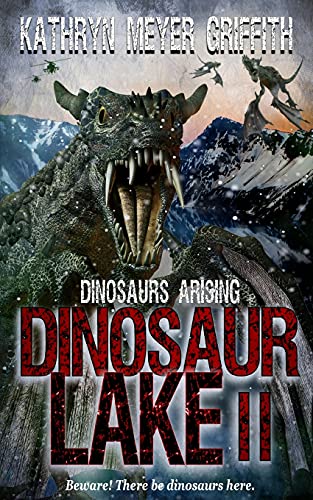 Prehistoric creatures have again invaded Crater Lake National Park ...and this time there’s more than one. DINOSAUR LAKE II: Dinosaurs Arising by Kathryn Meyer Griffith Henry Shore has been Chief Park Ranger at Crater Lake National Park for thirteen years now and thought the days when he’d had to fight a rogue dinosaur that lived in the caves below the lake were long over. Until one of his park rangers, to save a visitor’s life, is in a deadly struggle out in the woods with a new breed of dinosaur worse than the last one. It’s as big as a man, but this one is a young one. And growing. Then more of the creatures begin to show up everywhere, threatening people and destroying the tranquility and safety of his beloved park. A tourist trolley filled with fifteen people is snatched up off the crater’s rim by another version of the younger one...but this one has grown into a giant with fangs, claws and a deadly tail. And this one has wings. Ugly Gargoyles, Henry calls them. For this one isn’t alone. They’re flying beyond the park’s boundaries into the neighboring towns. So Henry, with the help of his son-in-law, a paleontologist named Justin, and a band of brave park rangers, and a few good soldiers, must not only protect his park and his people from monsters once more but find their lair and destroy it and them before the creatures kill again. ***

About Kathryn Meyer Griffith... Since childhood I’ve been an artist and worked as a graphic designer in the corporate world and for newspapers for twenty-three years before I quit to write full time. But I’d already begun writing novels at 21, over forty-four years ago now, and have had twenty-two (9 romantic horror, 2 horror novels, 2 romantic SF horror, 1 romantic suspense, 1 romantic time travel, 1 historical romance, 2 thrillers, and 4 murder mysteries) previous novels, 2 novellas and 12 short stories published from Zebra Books, Leisure Books, Avalon Books, The Wild Rose Press, Damnation Books/Eternal Press. These days I exclusively self-publish. My Dinosaur Lake novels and Spookie Town Mysteries are my best-sellers. I’ve been married to Russell for thirty-seven years; have a son, James, and two grandchildren, Joshua and Caitlyn, and I live in a small quaint town in Illinois, which is right across the JB Bridge from St. Louis, Mo. We have a quirky cat, Sasha (Too), and the 3 of us live happily in an old house in the heart of town. Though I’ve been an artist, and a folk singer in my youth with my brother Jim, writing has always been my greatest passion, my butterfly stage, and I’ll probably write stories until the day I die...or until my memory goes. 2012 EPIC EBOOK AWARDS *FINALIST* for my horror novel The Last Vampire-Revised Author’s Edition ~ 2014 EPIC EBOOK AWARDS *FINALIST* for her thriller novel Dinosaur Lake