Verwandte Artikel zu A Not Too Greatly Changed Eden: The Story of the Philosopher...

Schlett, James A Not Too Greatly Changed Eden: The Story of the Philosophers' Camp in the Adirondacks

A Not Too Greatly Changed Eden: The Story of the Philosophers' Camp in the Adirondacks 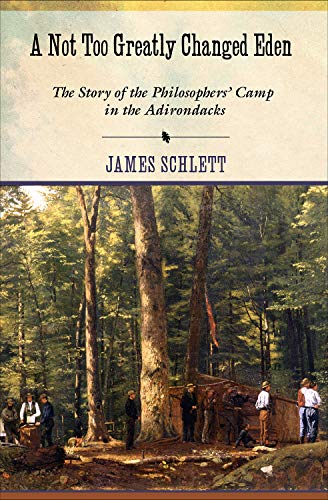 "In A Not Too Greatly Changed Eden, James Schlett takes a fascinating and iconic event in New York State and American cultural history and enlightens us about what happened with the motley crew of artists, philosophers, and thinkers who visited the Adirondacks in 1858. I learned much from this book and recommend it to other readers in a variety of fields, including American literature and art, New York history, and environmental history." -- Philip F. Gura, William S. Newman Distinguished Professor of American Literature and Culture, University of North Carolina at Chapel Hill, author of American Transcendentalism: A History "A Not Too Greatly Changed Eden is a definitive account of the Philosophers' Camp that will be of great value to those interested in Adirondack and regional history." -- Paul Schneider, author of The Adirondacks: A History of America's First Wilderness "Modern visitors who find retreat and rejuvenation in the Adirondacks will likely enjoy knowing a bit about the people who blazed the trail. But I think that the book will be even more valuable for people living inside the Adirondacks. This is a region whose economic fate depends on outside people and their capital-either visitors or, tragically, prisoners. And to move forward as a region, it is important for locals to learn the cultural history and vocabulary of "the philosophers," even if the favor is not always returned." * Environmental history * "Schlett makes a convincing argument for its significance. His archival detective work illuminates how widespread the interest in the event was at the time and beyond and contributes to an understanding of its importance in the biographies of the participants, as well as telling a history of the Adirondacks." * New York History * "This book offers considerable depth on an important event. Devotees of Adirondack history will find it well worth their effort." -- Richard Frost * Adirondack Daily Enterprise * "Many of us have heard the story of the Adirondacks' Philosophers' Camp near Follensby Pond that legendary getaway attended by such 19th-century dignitaries as Ralph Waldo Emerson and James Russell Lowell. But it's always remained just that: the stuff of lore and legend rather than real tangible history. Until now. Award-winning reporter James Schlett... has shined a journalist's spotlight on this excursion." -- Susan Arbetter * Capital Pressroom * "In his meticulous new history of the Philosophers' Camp,... the first book to focus exclusively on the event, Schlett tackles the subject with serious diligence, lending it a new kind of weight.... As readers will likely learn with some regret, Follensby Pond remains inaccessible to the public. In 2008, the Nature Conservancy purchased the 14,600-acre tract that includes the lake for $16 million from a private landowner. But after several unsuccessful attempts, Follensby has still not entered the state forest preserve, at which time the public will be permitted to visit. Neither is it a high priority. Nevertheless, it could be that Schlett's book redoubles those efforts. That is not something he intended with the book, yet he certainly wouldn't mind it either." -- James H. Miller * The Lake George Mirror * "Other scholars have paid glancing notice at this event but have confused its details or missed its importance. The most thorough scholarly account remains Paul Jamieson's "Emerson in the Adirondacks," published in New York History over a half-century ago and largely overlooked ever since.Until now.... Focusing primarily on the Follensby Pond expedition, Schlett uses it to develop a series of linked themes. The response of Stillman, Emerson, and others to the untouched wilderness of the central Adirondacks invites an assessment of how American culture was coping with the dramatic and often traumatic move away from its rural past and into an urban, industrial future. This is both an American and an Adirondack story (neither urban nor industrial, the Adirondacks is nonetheless what it is today because the rest of New York was becoming both), and Schlett employs it well." -- Philip Terrie * Adirondack Explorer *

In August 1858, William James Stillman, a painter and founding editor of the acclaimed but short-lived art journal The Crayon, organized a camping expedition for some of America's preeminent intellectuals to Follensby Pond in the Adirondacks. Dubbed the "Philosophers' Camp," the trip included the Swiss American scientist and Harvard College professor Jean Louis Rodolphe Agassiz, the Republican lawyer and future U.S. attorney general Ebenezer Rockwood Hoar, the Cambridge poet James Russell Lowell, and the transcendental philosopher Ralph Waldo Emerson, who would later pen a poem about the experience. News that these cultured men were living like "Sacs and Sioux" in the wilderness appeared in newspapers across the nation and helped fuel a widespread interest in exploring the Adirondacks.In this book, James Schlett recounts the story of the Philosophers' Camp, from the lives and careers of-and friendships and frictions among-the participants to the extensive preparations for the expedition and the several-day encampment to its lasting legacy. Schlett's account is a sweeping tale that provides vistas of the dramatically changing landscapes of the United States in the second half of the nineteenth century. As he relates, the scholars later formed an Adirondack Club that set out to establish a permanent encampment at nearby Ampersand Pond. Their plans, however, were dashed amid the outbreak of the Civil War and the advancement of civilization into a wilderness that Stillman described as "a not too greatly changed Eden." But the Adirondacks were indeed changing.When Stillman returned to the site of the Philosophers' Camp in 1884, he found the woods around Follensby had been disfigured by tourists. Development, industrialization, and commercialization had transformed the Adirondack wilderness as they would nearly every other aspect of the American landscape. Such devastation would later inspire conservationists to establish Adirondack Park in 1892. At the close of the book, Schlett looks at the preservation of Follensby Pond, now protected by the Nature Conservancy, and the camp site's potential integration into the Adirondack Forest Preserve.