For Love of Mother-Not (Pip & Flinx) 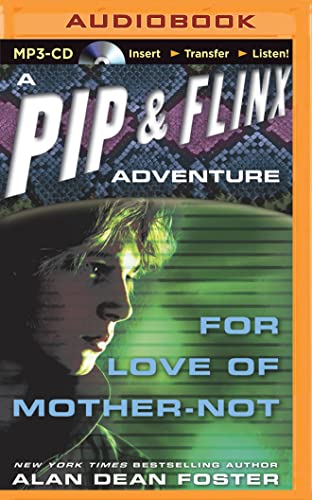 Flinx was just a freckle-faced, red¬headed kid with green eyes and a strangely compelling stare when Mother Mastiff first saw him on the auctioneer’s block. One hundred credits, and he was hers.For years the old woman was his only family. She loved him, fed him, taught him everything she knew—even let him keep the deadly flying dragon he called Pip. But when Mother Mastiff mysteriously disappears, Flinx tails her kidnappers on a dangerous journey. Across the forests and swamps of the winged world called Moth, their only weapons are Pip’s venom . . . and Flinx’s unusual Talents.

ALAN DEAN FOSTER has written in a variety of genres, in¬cluding hard science fiction, fantasy, horror, detective, western, historical, and contemporary fiction. He is the author of the New York Times bestseller Star Wars: The Approaching Storm, as well as novelizations of several films including Star Wars, the first three Alien films, and Alien Nation. His novel Cyber Way won the Southwest Book Award for Fiction in 1990, the first science fiction work ever to do so. Foster and his wife, JoAnn Oxley, live in Prescott, Arizona, in a house built of brick that was salvaged from an early-twentieth-century miners' brothel.