Verwandte Artikel zu The Black Swan: The Impact of the Highly Improbable

Taleb, Nassim Nicholas The Black Swan: The Impact of the Highly Improbable

The Black Swan: The Impact of the Highly Improbable 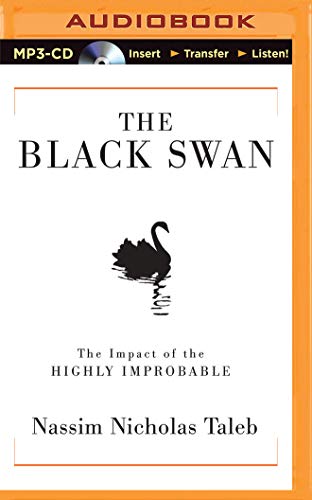 Maverick thinker Nassim Nicholas Taleb had an illustrious career on Wall Street before turning his focus to his black swan theory. With its revolutionary examination of the impact of highly improbable events, thisNew York Times bestseller took the world by storm. Not all swans are white, and not all events—no matter what the experts think—are predictable. Every so often, one of these unpredictable events occurs and has an immeasurable impact on the world—such as 9/11. Taleb argues the problem is that humans focus too much thought on what they already know, and not enough on what they don’t. The trick is understanding how to deal with black swans when they appear, and how to benefit from them.

Witty and irreverant, The Black Swan holds the power to change—for the better—the way people think about the world. It is unlike any book ever written, and its groundbreaking arguments are lucidly articulated by narrator David Chandler.

Nassim Nicholas Taleb is an essayist principally concerned with the problems of uncertainty and knowledge. Taleb's interests lie at the intersection of philosophy, mathematics, finance, literature, and cognitive science but he has stayed extremely close the ground thanks to an uninterrupted two-decade career as a mathematical trader. Specializing in the risks of unpredicted rare events (black swans"), he held senior trading positions in New York and London before founding Empirica LLC, a trading firm and risk research laboratory. Taleb is a fellow at the Courant Institute of Mathematical Science of New York University where he has been teaching a class on the failure of models since 1999. He has an MBA from the WhartonSchool and a Ph.D. from The University of Paris Dauphine.

David Chandler was born in Pittsburgh, Pennsylvania, in 1971. He attended Penn State and received an MFA in creative writing. In his alter-ego as David Wellington, he writes critically acclaimed and popular horror novels and was one of the co-authors of the New York Times bestseller Marvel Zombies Return. Den of Thieves is his first fantasy novel, soon followed by A Thief in the Night and Honor Among Thieves.