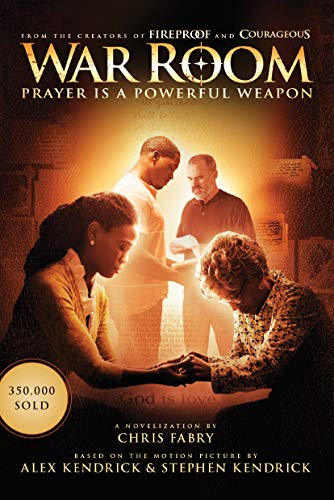 Veteran author Chris Fabry ("The Song") once again writes a novel based on a movie, this time depicting Alex and Stephen Kendrick's upcoming film about a family on the brink of self-destruction. Pharmaceutical rep Tony Jordan and his Realtor wife, Elizabeth, may be successful in their careers, but their routine marriage is gasping for breath. Tony's frequent travels open him up to temptation, pride, and self-deception, while Elizabeth flounders and feels bitter while working at home with their daughter. Clara, Elizabeth's elderly new client, sees the woman's emotional turmoil and introduces her to the transformational power of prayer. With Clara's support and encouragement, Elizabeth begins praying for her relationship, and as the changes come, the couple starts opening up to years of overdue communication and a healing that often hurts. As their feelings are laid bare, the stress is overshadowed by hope and grace--an encouraging message. With a strong emphasis on family values and biblical themes, this story challenges churchgoing readers to act on their belief in the power of prayer.--Publishers Weekly

Top pick! This is a novelization of the Kendrick brothers' screenplay, yet Fabry has included so much meaningful spiritual content that it is difficult to remain unchanged after reading this book. The characters and their situations are so incredibly realistic that readers will be able to examine their own lives in the mirror of the characters. A fantastic story of the meaning and power of prayer. 4.5 stars--Romantic Times

Juggling motherhood and her job as a real-estate agent, Elizabeth Jordan wishes her husband could help more around the house. But Tony’s rising career as a pharmaceutical salesman demands more and more of his time. With a nice home in the suburbs and a lovely young daughter, they appear to have it all—yet they can’t seem to spend time together without fighting.

Hoping for a new listing, Elizabeth visits the home of Clara Williams, an elderly widow, and is both amused and uncomfortable when Clara starts asking pointed questions about her marriage and faith. But it’s Clara’s secret prayer room, with its walls covered in requests and answers, that has Elizabeth most intrigued . . . even if she’s not ready to take Clara’s suggestion that she create a prayer room of her own. As tensions at home escalate, though, Elizabeth begins to realize that her family is worth fighting for, and she can’t win this battle on her own. Stepping out in blind faith, putting her prayers for her family and their future in God’s hands, might be her only chance at regaining the life she was meant for.