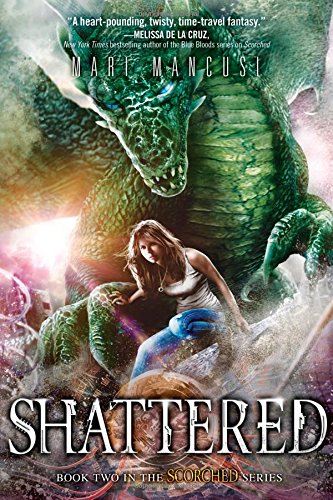 "I am obsessed with this book... you won't be able to put it down." - Seeing Double in Neverland

""Shattered" was a fantastic YA read. Thrilling and full of twists, this book was great. Fans of book 1, you won't be disappointed with this wonderful sequel. And YA lovers, this is a series you'll want to check out." - Imagine a World

"I would recommend this book to those who like dragons and like reading sci-fi/fantasy. There was a lot here to like and I can't wait to see what happens next." - Hidden in Pages

"I totally enjoyed this sequel. The last part of this book was like an action movie and that twist at the end was totally unexpected. I'm so looking forward to the next book in this series." - Books of Love

""Shattered" was a thrilling sequel and I absolutely can not wait for book three, Smoked! " - The Couch Potatoes Digest

"Questions of loyalty and trust, thwarted and unrequited love, and even addiction are addressed in this nifty contemporary fantasy." - Booklist

A girl at the end of the world. Two brothers fighting for opposite sides.
And a dragon who can save them all...Or set the world on fire.

Trinity's world changed forever the day she stole Emmy's egg. Now she's on the run with the last living dragon and twin brothers from a war-torn future. Connor may have betrayed his mission to kill Emmy, but he'll still do whatever it takes to prevent the coming dragon apocalypse.

When a video of Emmy flying over the skies of West Texas goes viral, the government closes in-and the future they've risked everything for is about to go up in flames.

Don't miss the next firey, action-packed installment in Mari Mancusi's heart-pounding Scorched trilogy-and for more, be sure to pick up the epic conclusion Smoked in September.