Verwandte Artikel zu The First Season: The Story of How a Rookie Coach Took...

Carter, Johnny The First Season: The Story of How a Rookie Coach Took a Newly Integrated Team to a Texas State Championship

The First Season: The Story of How a Rookie Coach Took a Newly Integrated Team to a Texas State Championship 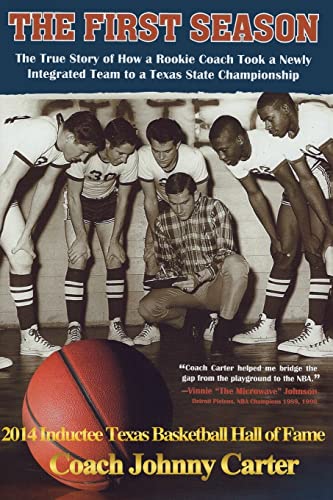 When Coach Johnny Carter led the Kennard Tigers to their first State Championship, he did more than defy expectations. The small team from east Texas was unassuming and newly- integrated. They had a rookie coach no one had ever heard of and they went from being on no one’s radar to claiming the title. They did it all in their very first season. www.CoachJohnnyCarter.com

Coach Johnny Carter was born and raised in Madisonville, Texas, and graduated from Madisonville High School in 1961. After an excellent basketball career at Madisonville, he went to Lon Morris Junior College on a scholarship. He graduated with a Bachelor of Science degree from the University of Houston and finished his master’s degree at Sam Houston State University. Coach Carter’s first coaching job was at Kennard High School in 1967. In four years there, his teams compiled a record of 160-13, winning three State Championships in 1967, 1968, and 1970. The 1968 Kennard Tigers set three Texas State Tournament scoring records, the last of which—most points scored in a three-game series—still stands. Carter served as an assistant coach at Howard Payne University in Brownwood, Texas for three years. They were the Lone Star Conference Tri-Champions in 1971 and played in the National AAU Tournament. Carter was head coach at McLennan Community College in Waco, Texas, for seven years, finishing second in the conference in his first season in 1974. Thereafter, his teams won six consecutive conference championships. They qualified for the Regional Tournament every year, reaching the National Junior College Tournament in 1976. He was voted Junior College Coach of the Year by the Texas Association of Basketball Coaches that season. In 1980, his team was the winner of the highest scoring game in the history of basketball: 169-165 against Kilgore. The game ball is in the trophy case at the National Basketball Hall of Fame in Springfield, Massachusetts. He coached two players at MCC who went on to the NBA: Vinnie (“The Microwave”) Johnson and Sam Worthen. Vinnie, the seventh player taken in the draft, played on two NBA championship teams for the Detroit Pistons in 1989 and 1990. Sam is on the coaching staff with the Harlem Globetrotters. Coach Carter was an assistant coach at the University of Oklahoma for two years, reaching the NIT Final Four in 1982. Carter was head coach for twenty-two years at Madisonville High School and had sixteen playoff teams. In 1995, they reached the State finals. Throughout his career, Carter’s teams were known for their aggressive full-court pressure defense, which he used every year after that memorable first season. His teams compiled an overall record of 903 wins and 241 losses. Several of Coach Carter’s players went on to have outstanding coaching careers. Among those are Danny Kaspar, Tony Mauldin, Eddie Nelson, and Randy Weisinger.