The It Takes Two Collection: A Whole New Ball Game; Two Cool for School; Double or Nothing; Go! Fight! Twin! [With Stretchy Headband] 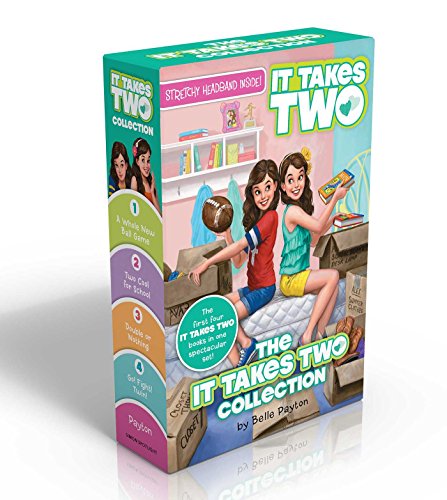 Get to know twins Alex and Ava and their Texas football family with the first four books of the It Takes Two series!

It’s not just middle school...it’s middle school times two! Twelve-year-old twins Alex and Ava Sackett have just moved from the East Coast to a small Texas town obsessed with football. Their father is the new coach—but that won’t make middle school any easier for these twins! With school elections, football tryouts, and the occasional switching places scheme, Alex and Ava must stick together if they want to take their new school by storm and prove two ismuch better than one!

This deluxe boxed set includes A Whole New Ball Game, Two Cool for School,Double or Nothing, Go! Fight! Twin!, and a fashionable yet practical stretchy headband both Ava and Alex would appreciate!

Belle Payton isn't a twin herself, but she does have twin brothers! She spent much of her childhood in the bleachers reading--er, cheering them on--at their football games. Though she left the South long ago to become a children's book editor in New York City, Belle still drinks approximately a gallon of sweet tea a week and loves treating her friends to her famous homemade mac-and-cheese. Belle is the author of many books for children and tweens, and is currently having a blast writing two sides to each It Takes Two story.