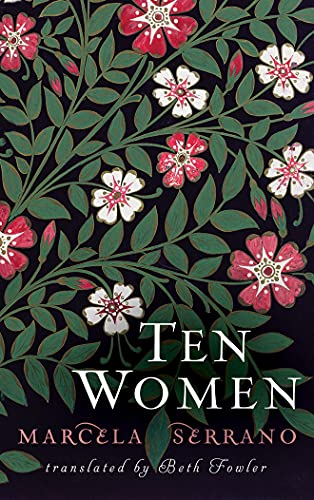 For nine Chilean women, life couldn’t be more different. There is the teenage computer whiz confronting her sexual identity. A middle-aged recluse who prefers the company of her dog over that of most humans. A housekeeper. A celebrity television personality. A woman confronting the loneliness of old age.

Of disparate ages and races, these women represent the variety of cultural and social groups that Chile comprises. On the surface, they seem to have nothing in common...except for their beloved therapist, who brings them together. Yet as different as they all are, each woman has a story to share.

As the women tell their stories, unlikely common threads are discovered, bonds are formed, and lives are transformed. Their stories form an intricate tale of triumph, heartache, and healing that will resonate with women from all walks of life.

Marcela Serrano is the daughter of writers and an award-winning Chilean novelist. Her debut novel We Loved So Much won the Literary Prize in Santiago. Her subsequent novels, among them The Hotel of the Sad Women and Our Lady of Loneliness, met with much success, landing her the Sor Juana Ines de la Cruz Prize and a runner-up nod in the prestigious Premio Planeta competition. She is widely considered one of the best Latin American writers working today. Ten Women is her first novel to be published in English.

Originally from Inverness, Scotland, Beth Fowler earned her degree in Hispanic Studies from the University of Glasgow, including a year teaching English in Santiago, Chile. She began working as a freelance translator in 2009, and after winning the Harvill Secker Young Translators’ Prize in 2010 she began to move her focus from commercial to literary translation. Her first novel translation Open Door by Argentine writer Iosi Havillo was published in 2011. She lives near Glasgow with her husband and son.