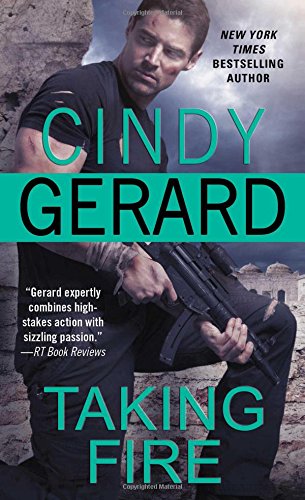 Six years ago, tough-as-nails military contractor Bobby Taggart met the woman of his dreams in war-torn Kabul—a sexy, whip-smart war correspondent who approached him at a local bar, took him to bed, made him fall in love...and then mysteriously disappeared. In her wake, the terrorist leader he’d been mining for valuable intel was assassinated—then Bobby discovered his phone had been bugged. And he’s pretty damn sure he’s been played for a fool.

Now, a covert security mission for the U.S. Embassy in Oman unexpectedly reunites him with Talia Levine, the woman who betrayed him and broke his heart. And there’s one more secret she hasn’t told him—one that will change his world. But as the heat of anger mixes with a still-simmering passion, dangerous forces close in, their sights set on Talia. Trust is the only way they will survive—but with their lives in the balance, can Bobby risk trusting her again?

Cindy Gerard is the critically acclaimed New York Times and USA Today bestselling author of the wildly popular Black Ops series, the Bodyguards series, and more than thirty contemporary romance novels. Her latest books include the One-Eyed Jacks novels Killing Time, Running Blind, and The Way Home. Her work has won the prestigious RITA Award for Best Romantic Suspense. She and her husband live in the Midwest. Visit her online at CindyGerard.com.