Arnošt Frischer and the Jewish Politics of Early 20th-Century Europe 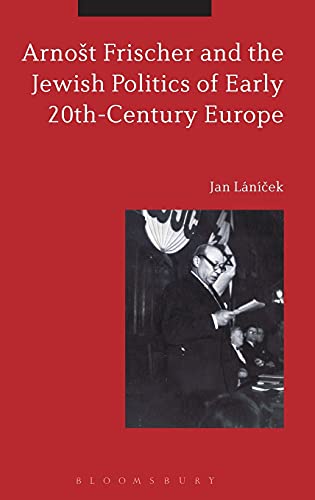 Basing his book on extensive archival research in Czechoslovakia and in Canada, Israel, Switzerland, Great Britain, and the US; the contemporary German, Jewish, and Czech press; and a large array of published materials, and including useful maps and illustrations, Lanicek (Univ. of New South Wales, Australia) not only describes the evolution of Frischer's ideas and strategy on behalf of Czech Jewry but also traces the difficult history of this small, fragmented population whose leadership was divided by language, religious observance, nationalism, and Zionism and was decimated during WW II and by the communist coup in 1948. Frischer's persistent struggle for Jewish minority rights against the nationalizing projects of successive Prague governments forms the core of this fascinating political and personal portrait. Summing Up: Highly recommended. Upper-division undergraduates and above. * CHOICE * This pioneering study of Arnost Frischer works at two levels. It is at once the political biography of a well-intentioned activist who sought to give Czechoslovak Jews a voice before, during and after the Shoah and an analysis of state attitudes towards Jews in Central Europe during the first half of the twentieth century. Lanicek's historical research is second to none: every page of this book is scrupulously researched and objectively presented. Lanicek's clear-eyed, unflinching approach to some of the most sensitive moments in Czechoslovak history - before, during and immediately after the Second World War -- make him one of the most authoritative and reliable historians writing on the plight of the Jews in Central Europe today. * Mary Heimann, Cardiff University, UK * This comprehensive biography of Arnost Frischer (1887-1954), one of the leading Zionists in Czechoslovakia and a member of the Czechoslovak National Council (the exiled parliament) in London during the Second World War, provides a unique insight into the history of the Jews of the Czech lands and independent Czechoslovakia. It shows how this relatively small community responded to the rise of Czech nationalism and the worsening international climate of the 1930s. It is essential reading for all those interested in the response of Jews in Central Europe to the rise of German Nazism and to its ever-intensifying campaign against European Jewry culminating in the Holocaust. * Antony Polonsky, Brandeis University, USA *

In this analysis of the life of Arnost Frischer, an influential Jewish nationalist activist, Jan Lanicek reflects upon how the Jewish community in Czechoslovakia dealt with the challenges that arose from their volatile relationship with the state authorities in the first half of the 20th century. The Jews in the Bohemian Lands experienced several political regimes in the period from 1918 to the late 1940s: the Habsburg Empire, the first democratic Czechoslovak republic, the post-Munich authoritarian Czecho-Slovak republic, the Nazi regime, renewed Czechoslovak democracy and the Communist regime. Frischer's involvement in local and central politics affords us invaluable insights into the relations and negotiations between the Jewish activists and these diverse political authorities in the Bohemian Lands. Vital coverage is also given to the relatively under-researched subject of the Jewish responses to the Nazi persecution and the attempts of the exiled Jewish leadership to alleviate the plight of the Jews in occupied Europe. The case study of Frischer and Czechoslovakia provides an important paradigm for understanding modern Jewish politics in Europe in the first half of the 20th century, making this a book of great significance to all students and scholars interested in Jewish history and Modern European history.