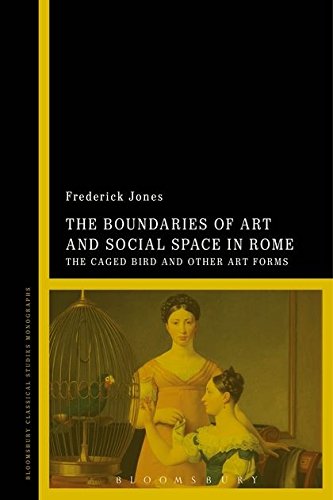 The topic and title are hugely engaging, and Jones' combined literary and art historical approach has much to recommend it. * American Journal of Philology * The monograph comprises six chapters that delve into providing rich source evidence from ancient literature and material culture ... There are some incredibly salient discussions and analyses that Jones formulates in this monograph. Moreover, it is a commendable work that will drive specialist audiences to engage further in the topics of boundaries, garden spaces, and cognitive development in Roman art and literature. * The Classical Journal * Jones performs an admirable service in this book by drawing our attention to artifacts that are not usually considered in tandem, and by expanding our view of what we might consider `Roman art' in the process. * Classical World * This is an excellent, bouncy book - the better for not being over meaty and for making its points briskly and with liveliness. It uses the visual and environmental arts - from garden painting in the domestic villa, via actual gardens, and tapestry to the uses of caged birds in the household, all in relation to the literary texts about such materials, in order confront some of the deeper meanings of Roman culture in social space. Its range of themes and their discussion present a deft but at the same time profound reflection on the boundaries of art in the Roman world. * Jas Elsner, Humfrey Payne Senior Research Fellow in Classical Archaeology and Art, Oxford University, UK * What constitutes art in the Roman world? This complex question is at the heart of Jones' new book, which offers an ambitious reflection on the boundaries of art in the Roman imagination ... This book succeeds in its central tenet of investigating the boundaries of art ... The use of cross-media evidence makes the book approachable to scholars of both literature and material culture; and the emphasis on nature and cognitive awareness in three of the test-cases will make it especially appealing to those interested in landscape, spatial studies, and psychogeography. * Bryn Mawr Classical Review *

This volume focuses on four cultural phenomena in the Roman world of the late Republic - the garden, a garden painting, tapestry, and the domestic caged bird. They accept or reject a categorisation as art in varying degrees, but they show considerable overlaps in the ways in which they impinge on social space. The study looks, therefore, at the borderlines between things that variously might or might not seem to be art forms.

It looks at boundaries in another sense too. Boundaries between different social modes and contexts are embodied and represented in the garden and paintings of gardens, reinforced by the domestic use of decorative textile work, and replicated in the bird cage. The boundaries thus thematised map on to broader boundaries in the Roman house, city, and wider world, becoming part of the framework of the citizen's cognitive development and individual and civic identities.

Frederick Jones presents a novel analysis that uses the perspective of cognitive development in relation to how elements of domestic and urban visual culture and the broader world map on to each other. His study for the first time understands the domestic caged bird as a cultural object and uniquely brings together four disparate cases under the umbrella of 'art'.