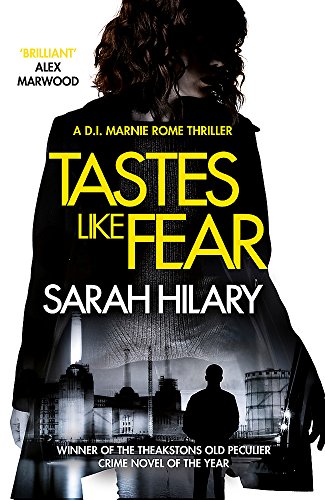 Brilliant. I put everything else aside when I have one of her books in the house (Alex Marwood)

A tense, terrifying tale of obsession and possession . . . a writer at the top of her game (Alison Graham Radio Times)

A truly chilling exploration of control, submission and the desire to step out of a normal life (Eva Dolan)

Marnie goes from strength to strength... this one drips with the gritty, dirty, danger of the urban wastelands around the river (Julia Crouch)

Highly compelling and atmospheric... the storyline and characters involved me completely, from the very first (Kate Rhodes)

Hilary's depiction of 13-year-old Laura Beswick, Loz, is heartbreaking and convincing. This pacy, easy-reading novel is lifted by its perceptive examination of the distress of girls who don't believe they fit their allotted space in the world and the agony of the parents who try to make them understand how deeply they are loved (N. J. Cooper)

Tastes Like Fear is quality intelligent crime, with enough twists to keep you glued to the page and a massive dose of terrifying anticipation (Northern Crime blog)

Sarah Hilary won the 2015 Theakston's Crime Novel of the Year with her debut, the 2014 Richard and Judy pick SOMEONE ELSE'S SKIN. She followed up with NO OTHER DARKNESS, proclaimed as 'riveting' by Lisa Gardner and 'truly mesmerising' by David Mark. Now D.I. Marnie Rome returns in her third novel.

The young girl who causes the fatal car crash disappears from the scene.

A runaway who doesn't want to be found, she only wants to go home.

To the one man who understands her.

Just as he gives shelter to the other lost girls who live in his house.

He's the head of her new family.

D.I. Marnie Rome has faced many dangerous criminals but she has never come up against a man like Harm. She thinks that she knows families, their secrets and their fault lines. But as she begins investigating the girl's disappearance nothing can prepare her for what she's about to face.

Because when Harm's family is threatened, everything tastes like fear...