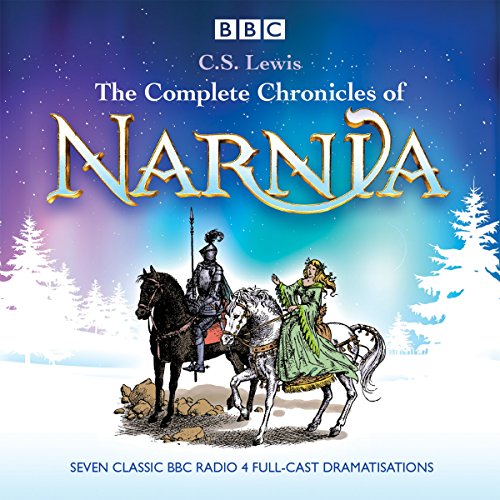 The Magician’s Nephew: When Polly and Digory discover some magic rings, they begin the most exciting and dangerous journey of their lives - and encounter the mighty lion Aslan...

The Lion, the Witch and the Wardrobe: Lucy, Peter, Edmund and Susan enter a magical world of talking fauns and flying horses, where the evil White Witch has cast Narnia in perpetual winter.

The Horse and His Boy: Shasta and his talking horse Bree flee from a life of slavery and head for the freedom of Narnia, facing many perils along the way.

Prince Caspian: Peter, Susan, Lucy and Edmund are called upon to help Caspian free Narnia of his evil uncle’s regime and reclaim freedom and happiness.

The Voyage of the Dawn Treader: Edmund, Lucy and Eustace join King Caspian on a perilous mission to find his friends, the seven lost Lords of Narnia.

The Silver Chair: Jill and Eustace set out to find King Caspian’s lost son, and in the grim land of the Earthmen they encounter the wicked Green Lady.

The Last Battle: The King is in danger, and Narnia faces its darkest hour. Eustace and Jill must help its people fight for the future of the once-glorious kingdom.

C.S. Lewis was born in Belfast in 1898. In 1917 he went to Oxford University, but his studies were interrupted by the First World War, from which he was sent home wounded. One of his friends at Oxford was J.R.R. Tolkien. The Lion, the Witch and the Wardrobe was published in 1950. Fascinated by the difference in time between our own world and Narnia, Lewis wrote some of the books in a different order to the events which they portrayed. An example of this is The Magician's Nephew, which details the early history of Narnia and is intended to be read before the others. C.S. Lewis died in 1963.