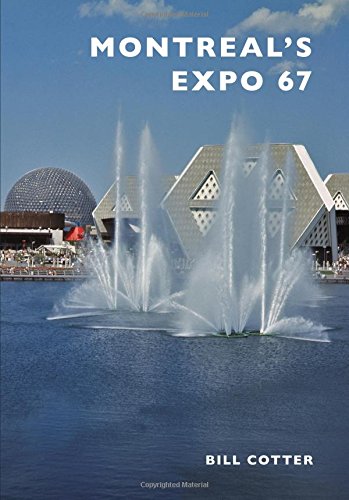 In 1967, Canada celebrated the 100th anniversary of its founding with a spectacular party, and the whole world was invited. Montreal's Expo 67 was the first world's fair held in Canada, and it was a huge success, attracting over 50 million visitors. The 1,000-acre site was built on two man-made islands in the St. Lawrence River and incorporated 90 futuristic pavilions created by some of the world's greatest architects and designers. Over 60 countries were represented, along with many private, corporate and thematic pavilions, all brought together under the theme "Man and his World." With performers and entertainers of all varieties, restaurants, cultural attractions, exhibitions and a world-class amusement park, Expo 67 was literally the party of the century, exceeding all expectations.

Bill Cotter is a longtime world's fair enthusiast and has traveled to many of these international exhibitions. The author of nine other books on fairs for Arcadia Publishing, he is a frequent contributor to other books, magazines, and documentaries on world's fairs, and he has spoken extensively on the subject. His photo collection has been featured in several museum exhibits, and he operates two popular websites devoted to the study and appreciation of the fairs.