Verwandte Artikel zu The Paradise Suite: Bobos in Paradise and On Paradise...

Brooks, David The Paradise Suite: Bobos in Paradise and On Paradise Drive

The Paradise Suite: Bobos in Paradise and On Paradise Drive 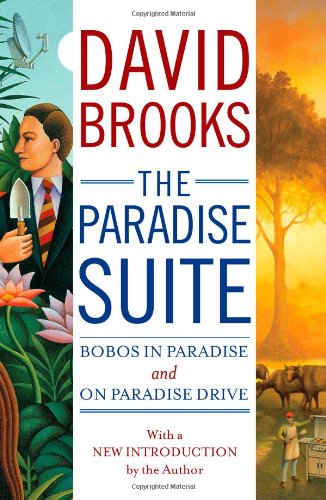 "A worthy sequel to Bobos, On Paradise Drive is engaging, consistently entertaining and occasionally schizophrenic: In his sweeping assessment of that creature known as `the American,' Brooks pokes with one hand and pats with another.... Brooks is a master satirist." -Baz Dreisinger, The New York Observer "A mixture of heartfelt fondness and dead-on-ridicule, animated by an energetic glass-half-full ambivalence. The book is a pleasure, simultaneously bracing and comforting." -The New York Times Book Review "An absolute sparkler of a book, which should establish David Brooks-not that he needs establishing-as the smart, fun-to-read social critic of his generation." -Christopher Buckley "Brooks doesn't disappoint the summer armchair vagabond. . . . It's easy to find yourself in his comic descriptions, as Brooks offers hilarious send-ups of every demographic group and lifestyle imaginable. . . . On Paradise Drive is a tour of the American psyche and its myriad manifestations of some considerable and satisfying force. Like his previous bestseller, Bobos in Paradise, many of us, even if not 'bourgeois bohemians,' will enjoy the ride." --Jeff McCrehan, Christian Science Monitor "Brooks is a clever and insightful inspector of the American scene. ... Bobos in Paradise was a well-deserved bestseller. On Paradise Drive is just as funny and perceptive." --James Q. Wilson, The Wall Street Journal

David Brooks aims to help explain people: Why do we keep ourselves so busy all the time? Why do we sue each other so much, and turn our personal interests into moral crusades? Why have we been so successful in leading the technological revolutions of the past century, the electrical age, the automotive age, the information age? Why do we drink our coffee in cardboard take-out cups, while the rest of the world drinks their coffee in ceramic cups sitting down in cafes? We fancy ourselves a practical, hard-headed people. But the fact is, utopian fervour animates American life. We don't dream of the great global utopias, the way the Marxists used to. Americans dream of personal utopias, the kind you can achieve for yourself and your friends and family through hard work, profit, masterful living and maybe a really great country house. Moreover, we don't only dream of these paradises. Deep down we expect we will achieve them, and many of us sense that somehow we have an obligation to achieve them if we are to fulfil our destinies. Brooks revives the centuries-long but now neglected debate about the American character to show how our current manias emerge from perennial American obsessions. It's about the ubermoms, those achieving women who weigh less than their kids, who have taken time off from work to hone their little ones and dominate their school auction committees. Such a debate helps us see how classic American drives and patterns per mutate with each new age. We are still united by a common national culture.