The Guerrilla Factory: The Making of Special Forces Officers, the Green Berets 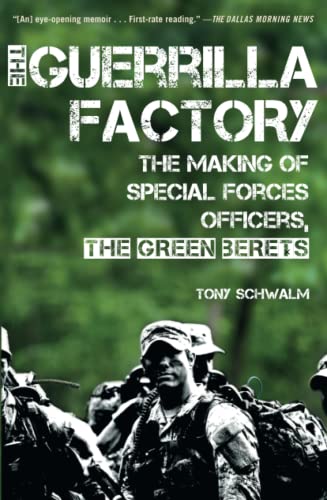 "In this wonderfully written, candid personal account, Tony Schwalm reveals what makes Special Forces soldiers tick. Green Berets like to say that their most important weapon is between their ears. The Guerrilla Factory shows how they are selected and trained to get inside the heads of both friends and enemies. Schwalm also takes us downrange to hotspots in Haiti, Afghanistan and the Middle East." -Linda Robinson, author of Masters of Chaos: The Secret History of the Special Forces "This valuable book is full of great insights from a veteran Special Forces warrior on what it takes to make the cut in the Green Berets. It takes you inside the world of our elite SF warriors-and outside the gate on real-world ops." -Jack Coughlin, coauthor of Shooter: The Autobiography of the Top-Ranked Marine Sniper "A crackling good read. Tony pulls in the reader by telling story after story. No theories here; instead, the book brings the reader into a world of hard work and never-ending treks. No wonder the Green Beret teams are known worldwide. They get the job done, and the author shows why. You're exhilarated at the end of this fast-paced narrative." -Bing West, bestselling author of The Village "The Guerrilla Factory isn't just an account of how Green Berets are made. It's a highly personal, compellingly written and thought-provoking story of one man's journey from conventional soldier to unconventional warrior. Tony Schwalm's book is a page turner and an eye opener." -Douglas Waller, New York Times betselling author of Wild Bill Donovan: The Spymaster Who Created the OSS and Modern American Espionage "In The Guerilla Factory, Tony Schwalm offers a gripping insider's story of how America's elite warriors are made. From the terror of capture to the art of building an insurgent army, Schwalm's personal account takes you deep into the shadowy world of the Special Forces to reveal how Green Berets are picked, trained, and deployed in exotic places where the usual rules of warfare don't apply--where success is shrouded in secrecy and failure can mean death." -- Jonathan W. Jordan * bestselling author of Brothers Rivals Victors: Eisenhower, Patton, Bradley, and the Partnersh * "Even in an age of high-tech warfare, America will always need dedicated warrior-diplomats who can both confront our enemies and work with allies in an effort to create peace. Tony Schwalm has written a gritty, muscular, compelling account of what it takes to join the ranks of America's elite warrior-diplomats, the Green Berets. This is not just a memoir by a top soldier, leader, and scholar-it is a fine tale of courage, compassion, and selflessness from one of our country's finest." -Eric Greitens, New York Times bestselling author of The Heart and The Fist: The Education of a Humanitarian, the Making of a Navy SEAL "Schwalm's insider perspective on the training for unconventional warfare gives his book a fresh, authentic voice." * Publishers Weekly * "A retired U.S. Army Special Forces officer provides a behind-the-scenes look at the physical, psychological and emotional toll one pays to join the ranks of America's most elite fighting force. . . . An eye-opening, unconventional war story in which the war itself resides in the training." -Kirkus Reviews "Captivating . . . one of the more engaging books I have read in quite some time. . . . As entertaining as it is informative. The Guerrilla Factory is one of those select works that will appeal to a wide array of readers. . . . For those who simply enjoy a good war story, Tony Schwalm will demonstrate he has few peers." * Armchair General * "[A] well written, eye-opening memoir . . . Rich with twists, anecdotes and insights into how officers are selceted and trained to lead small units of tough, highly trained fighters behind enemy lines. . . . [This] is first-rate reading." * Dallas News *

The Navy has the Navy Seals and the Army has the Green Berets. Men forged in battle, the Green Berets immerse themselves in hostile territory, sleeping next to their enemies to study the people who want to kill them. In this behind-the-scenes memoir, acclaimed as "riveting" and an "eye-opening, unconventional war story" (Kirkus Reviews), Green Beret and retired lieutenant colonel Tony Schwalm takes you deep inside the legendary training camp that turns men into warriors. The Special Forces Qualification Course, a.k.a. Q Course, is infamous as the training pipeline through which conventional soldiers are transformed, with blood, sweat, and tears, into unconventional guerrillas. Tony Schwalm knows that pipeline from end to end. As a student, he went through it to earn his green beret. As a commander of Special Forces, he operated the pipeline at Fort Bragg, pushing soldiers through brutal tests of physical strength and stamina. In this dramatic account, Schwalm brings what Publishers Weekly calls a "fresh, authentic voice" to describe the challenges of the Q Course, where men are pushed to the point of hallucination, walk until their feet are bloody, step off thirty-foot waterfalls in the dark, and fight packs of angry dogs with nothing but a rubber rifle. Revealing details never shared outside of military circles, Schwalm provides a rare and rousing look inside the courageous souls of soldiers who put their lives on the line for duty, honour, and country. The Dallas Morning News recommends, "For fans of military memoirs, his book is first-rate reading."