Shanghai Grand: Forbidden Love and International Intrigue on the Eve of the Second World War 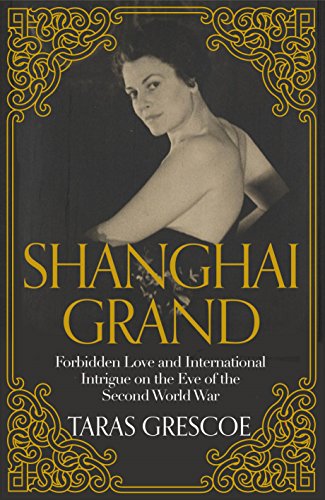 As Taras Grescoe, a respected Canadian writer of nonfiction, shows in this marvellous, microscopically descriptive history of what is now one of the most populous and smoggiest megalopolises on earth, Shanghai in the 1930s was internationally notorious as 'the wicked old Paris of the Orient', with 'as vivid a cast of chancers, schemers, exhibitionists, double-dealers and self-made villains as had ever been assembled in one place'. Grescoe lavishly keeps the promise of his book's subtitle. Spectator With its surplus of romance and more or less digestible political intrigue, it's not hard to imagine the movie version of Shanghai Grand, a lush period spectacle starring, say, Michelle Williams as Hahn, Chang Chen as Zau and, might I suggest, Ralph Fiennes as Sassoon - he's already displayed an irresistible knack for portraying hoteliers quixotically devoted to upholding the laws of luxury whilst the barbarians storm the gate. The Globe and Mail

On the eve of the Second World War, the foreign-controlled port of Shanghai was the rendezvous for the twentieth century's most outlandish adventurers, all under the watchful eye of the illustrious Sir Victor Sassoon. Emily 'Mickey' Hahn arrived there at the height of the Depression. A legendary New Yorker journalist, Hahn's vivid writing would play a crucial role in opening Western eyes to the realities of life in China. But on reaching Shanghai, Hahn was nursing a broken heart after a disappointing affair with an alcoholic Hollywood screenwriter; she was convinced she would never love again. Checking in to Sassoon's glittering Cathay Hotel, Hahn was absorbed into the social swirl of the expats drawn to pre-war China, among them Ernest Hemingway, Martha Gellhorn, Harold Acton and the colourful gangster Morris 'Two-Gun' Cohen. But when she met Zau Sinmay, a Chinese poet from an illustrious family, she discovered the real Shanghai through his eyes: the city of rich colonials, triple agents, opium-smokers, displaced Chinese peasants, and increasingly desperate White Russian and Jewish refugees - a place her innate curiosity led her to explore first hand. Danger lurked on the horizon, though, as the brutal Japanese occupation destroyed the seductive world of pre-war Shanghai, paving the way for Mao Tse-tung and the Communists' rise to power. A compelling tale of fatal glamour and forbidden love, Shanghai Grand is their story, meticulously researched and vividly told.